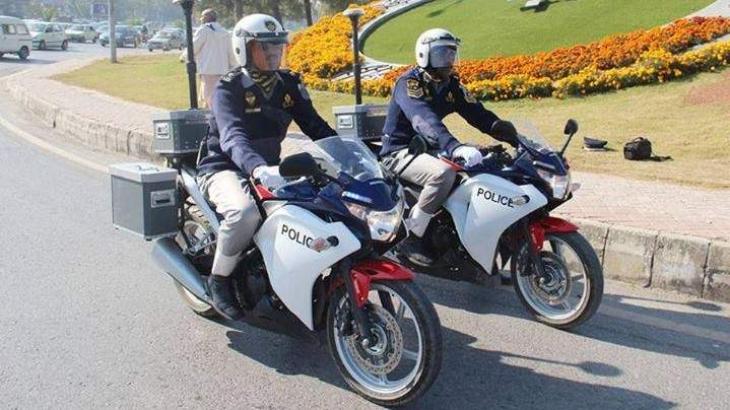 Following directions of Inspector General of Police (IGP) Islamabad Qazi Jamil ur Rehman, Senior Superintendent of Police (Traffic) Syed Karar Hussain has constituted special squads to check major violation on various roads and ensure smooth flow of traffic in the city. During this campaign, 12,961 motorcyclists were issued fine tickets during last one week amounting Rs. 1.1 million over various violations. A total of 6075 motorcyclists were fined for not using helmets.

Moreover, 127 motorcyclists were fined over lane violation, 155 for not having number plates, 149 for violating one-way, 438 over risky driving and 50 for involvement in one-wheeling.

As many as 471 bikes were also impounded at various police stations.

Police spokesman said that special campaign is underway to check violations while various teams headed by Senior Superintendent of Police (Traffic) Syed Karar Hussain are performing duties at main roads of the city and taking action against the violators. SSP Traffic Syed Karar Hussain has said that strict action would be taken during campaign against those involved in violation of traffic rules.

He said that the purpose of this campaign is to ensure better traffic discipline through cooperation of citizens and create traffic sense among them. The force issues traffic violation tickets not as a punitive measure but the purpose is to ensure safe road environment in the Capital and secure the lives of the people, the SSP (Traffic) added.