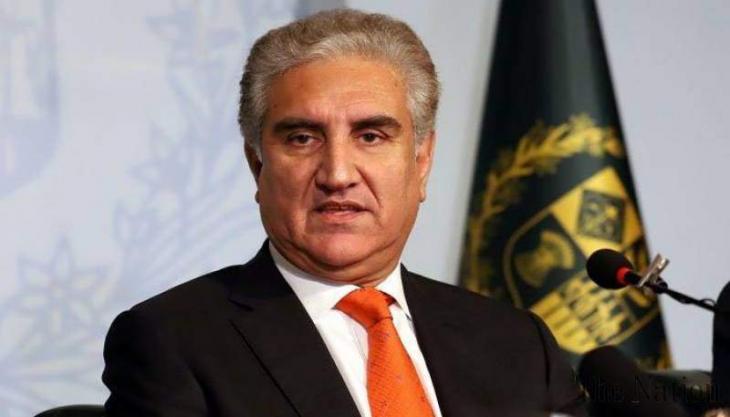 ISLAMABAD, (UrduPoint / Pakistan Point News – 21st Sep, 2021 ) :The foreign minister said Pakistan could work with the US through the Development Finance Corporation to generate economic activity along the Pakistan-Afghanistan border to help Afghan people rebuild their war-ravaged country.

Referring to the regional situation, he told the gathering that after assuming the office, Prime Minister Imran Khan offered that he would take “two steps” towards peace if India took one.

“Our message was simple: Pakistan and India should be fighting poverty instead of each other. Unfortunately, India not only spurned our overtures for peace but took actions in Occupied Jammu and Kashmir that have pushed South Asia into a blind alley,” he remarked.

He recalled that Imran Khan had come to the UN two years ago and warned that India‘s annexation of the disputed territory of Jammu and Kashmir would not silence the Kashmiri people’s cry for self-determination no matter what level of violence and suppression India unleashes against the Kashmiris. This has proved to be true.

He said Pakistan remained committed to finding a peaceful solution to the Jammu and Kashmir dispute, the main obstacle to lasting peace and stability in the region.

He said it was up to India to break the impasse and create conditions for the resumption of meaningful dialogue with Pakistan.

About Afghanistan, he said the stunning developments there had reset the regional landscape as no one could have expected that the Ghani government would fall so quickly.

Foreign Minister said while the Taliban made rapid military gains on the ground this summer, Ashraf Ghani‘s government was busy inciting hatred against Pakistan on social media. Unfortunately, successive Afghan governments found it was easier to play to the international gallery by blaming Pakistan for every problem in Afghanistan, than looking at the corruption and rot within.

He said the speed of Ghani regime’s collapse proved that President Biden had made the right call. As both he and Prime Minister Khan have pointed out, continuing the war in Afghanistan would not have changed the outcome.

“The international coalition did achieve its mission in Afghanistan: Al Qaeda is a shadow of what it was on the morning of September 11, 2001, and the U.S. mainland has not been attacked again. These are clear successes successes that, let me repeat, were achieved with Pakistan‘s cooperation, Qyureshi commented.

He said Pakistan and US shared the same objectives in Afghanistan and the former should not be blamed for correctly diagnosing the limitations of trying to solve the political problem in Afghanistan through military means.

“Instead of re-litigating the past, we now have to look forward. Our most urgent priority in Afghanistan must be to avoid a humanitarian crisis The collapse of the Afghan economy could cause another refugee crisis at our border. Since Pakistan cannot take more Afghan refugees, they will inevitably look farther afield to the Gulf, to Europe, even to North America,” he added.

He said as an immediate neighbor, Pakistan could not afford to disengage and the international community should hold the Taliban to their commitments on providing safe passage to those who want to leave the country as well as counterterrorism, human rights, and political inclusivity.

“Ostracizing Afghanistan proved to be a mistake in the 1990s and it would be a mistake now. An isolated and unstable Afghanistan would be the exactly the kind of place that would lure terrorist groups,” Qureshi said.

He said Pakistan was already experiencing an upsurge in terrorist attacks by the Tehreek-e-Taliban Pakistan and the Balochistan Liberation Army.

“So while we should expect the Taliban to honor their pledge and not allow terrorist groups to use Afghan territory to attack any other country again, we have to find more creative ways to elicit their cooperation on a sustainable basis.” To a question, the foreign minister said by eliminating terrorist network through a military operation, Pakistan had done its bit and cleansed the area from militants which had not been brought into mainstream.

He said if the international community failed to engage and deal with immediate humanitarian crisis and frozen funds not released then it would bring in instability.

He said Pakistan would do its best to persuade Taliban to adopt more inclusive approach.

About the women right to education, he said Afghanistan had changed and one could not say that women could not go to schools as no Sharia law prohibited doing so.

About Pak-US ties, he said it was mistake to abandon Afghanistan in 90s and it would be mistake to not have a continued working relation with an ally.

“We are not asking for any assistance, nor any dole out. We are offering opportunities for investment. Come and take advantage of opportunities We are focusing on geo-economics, not geo-politics. This is huge shift,” he added.