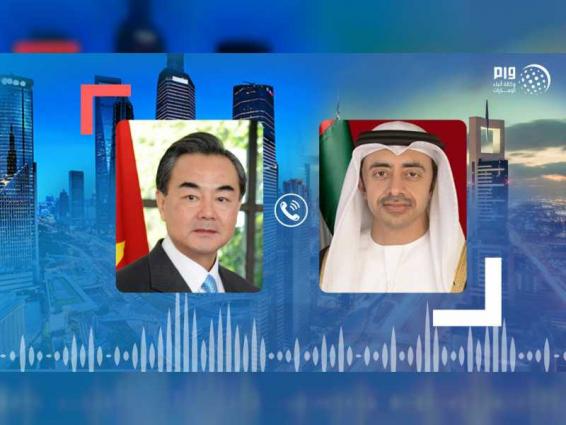 The UAE Foreign Minister and his Chinese counterpart also exchanged views on a number of issues of common concern, including climate change, highlighting the importance of strengthening joint efforts to achieve green and sustainable development.

They also reviewed the partnership and cooperation between the two countries in confronting the COVID-19 pandemic, in addition to the UAE‘s hosting of Expo 2020 Dubai on 1st October, and China‘s full support for the UAE during its hosting of this prominent global event.

The two ministers discussed the Global Development Initiative proposed by Chinese President Xi Jinping during his remarks at the general debate of the 76th session of the United Nations General Assembly and its role in strengthening the international partnership. Sheikh Abdullah welcomed the proposal that contributes to achieving sustainable and just recovery from the COVID-19 pandemic worldwide.

Sheikh Abdullah praised the pioneering efforts made by China in responding to climate change and its commitment to accelerating the transition to a green and low carbon global economy, which is in line with the goals of the UAE, the country that is looking forward to hosting the 28th session of the Conference of the Parties (COP 28) to the United Nations Framework Convention on Climate Change in Abu Dhabi in 2023.

His Highness Sheikh Abdullah praised the outstanding friendship between the UAE and China and their leadership, as well as the two countries’ interest in boosting strategic cooperation in all fields.

For his part, Wang Yi stressed that the current year 2021 holds great importance for the two friendly countries, as the UAE celebrates its golden jubilee and the 50th anniversary of its founding, and China celebrates the Centennial of the Communist Party of China, noting that the Chinese president appreciates the friendship relationship as well as mutual trust with His Highness Sheikh Mohamed bin Zayed Al Nahyan, Crown Prince of Abu Dhabi and Deputy Supreme Commander of the UAE Armed Forces.

The Chinese Foreign Minister congratulated the UAE on its election as a non-permanent member of the UN Security Council (UNSC) for the period 2022-2023, praising the efforts made by the UAE to consolidate global security and stability, stressing that China is pleased to see the UAE, through this membership, plays a more active role in protecting regional and global stability.