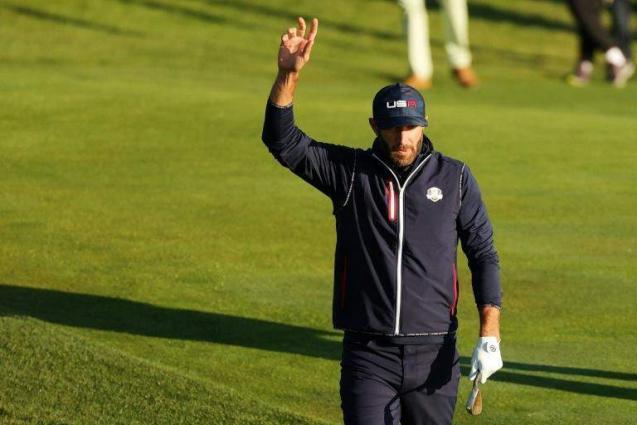 The United States seized a commanding 9-3 lead over Europe at the Ryder Cup on Saturday, dominating morning foursomes once more to surge ever closer to reclaiming the coveted title

The Americans won a third consecutive session 3-1 at Whistling Straits for their largest lead since 1975 despite Europe making a charge in each match, adding to the notion of a “Wake by the Lake” on the Lake Michigan shoreline.

Johnson and Schauffele each improved to 3-0.

“I felt like I’ve just played solid, not trying to do anything too crazy, just keep the ball in play,” Johnson said. “We played solid. We got off to a great start.

“It means a lot,” Rahm said. “We know it’s a long race. We knew we had three to make up from the start. We played unbelievable from six on. We took advantage of the breaks we had.” But Europe rookies Viktor Hovland and Bernd Wiesberger went 14 holes without trailing until fading at the finish as Americans Justin Thomas and Jordan Spieth charged late to win 2-up.

“We expect to go out and play well,” Spieth said. “Our team is playing great and I’m proud of them.” Four afternoon four-ball matches and 12 concluding Sunday singles matches will decide a winner. The Americans need 14.5 points to reclaim the Ryder Cup while Europe need 14 to retain the trophy.

Europe’s hopes looked good early as Rahm and Garcia rallied. Rahm won the sixth hole with a 10-foot birdie putt and Garcia chipped in from 41 feet at the ninth to equalize.

“We got on a great stretch of holes with birdies and chip ins,” Garcia said.

Garcia sank an eight-foot birdie putt at the par-3 12th to give the Spanish duo their first lead. They traded the 13th and 14th holes with bogeys before Garcia blasted his approach to five feet at the par-5 15th and Rahm sank the eagle putt.

The Spaniards took the match with a par at the par-3 17th, Garcia winning a record 24th Ryder Cup match.

“I’ve been fortunate to do it for many years,” Garcia said. “I’m so proud to be a part of Team Europe.” Johnson and Morikawa went 3-up after three holes on Johnson’s 47-foot chip in at the par-3 third and were 4-up through 10 before Casey and Hatton rallied.

Casey and Hatton won 11 and 13 with pars and 14 when Casey holed out for eagle from 105 yards. But Hatton missed a five-foot par putt at 15 and Johnson holed a four-footer for par to win the hole. They halved the next two to seal the match.

Spieth and Thomas, 3-down after six holes, took their first lead when Wiesberger missed an eight-foot par putt at 15 and doubled it with an eagle at the par-5 16th before an exchange of bogeys to end matters.

“It was a dogfight,” Schauffele said. “We knew it was going to be.” Harrington benched Rory McIlroy for Saturday’s foursomes matches after the four-time major winner lost twice in one day for the first time in his Ryder Cup career.

“We know we need a big performance with him in the singles,” Harrington said. “He needs to rest like everybody else.”McIlroy and England’s Ian Poulter were set to return in Saturday four-balls against Johnson and Morikawa.