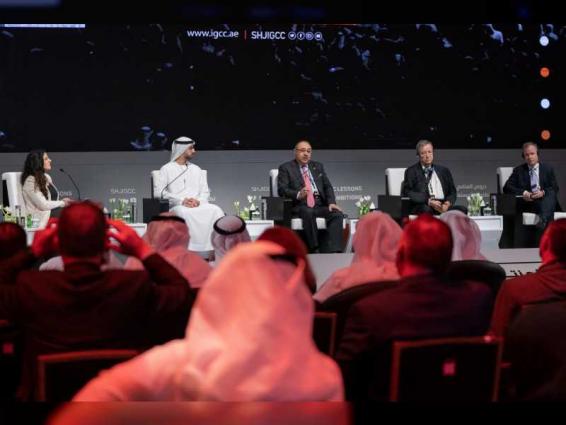 The elite group affirmed that despite the emergence of newer technologies, traditional concepts, techniques and tools continue to prove relevant in shaping the future of communications.

Taking part in the discussion, moderated by radio and tv presenter, Sally Mousa, Al Olama said, “Artificial Intelligence is increasingly shaping the world we live in. An example of this can be seen in how we receive sponsored content while browsing the internet. It is specially tailored for us as individuals via various AI aggregators closely following our online activity. While speed of communication is important in the digital age, quality of content cannot be undermined.

The effectiveness of communication is essentially a reflection of its quality. This is where the government should focus on, which is the move to ensure the quality of content reaching the public.”

For his part, Dudin stressed that information should be properly handled and disseminated to the public. He urged government officials to listen to what the public has to say, as doing so would give them an idea of what is needed and what should be done.

Ilves pointed out the importance of making government services more readily available online. “Governments need to fortify their digital identities. We also need to constantly invest in technology, prompting us to jump out of the backwardness and be at the forefront,” he said.

Sir Oliver remarked that the current realities the world is facing represents a pivotal time for change, adding, “The name of the game still lies in the ability to influence people. Over the last few months, the UK’s success in dealing with these extraordinary times has resulted from how the nation has managed to communicate our messages effectively across all channels. We need to fully grasp how to handle social media, making it work to our benefit and advantage.”

The panelists agreed that shared that despite the introduction of newer concepts like social media platforms, government communication departments should still make use of existing techniques and combine them with new media tools and platforms to raise awareness and keep the public informed.