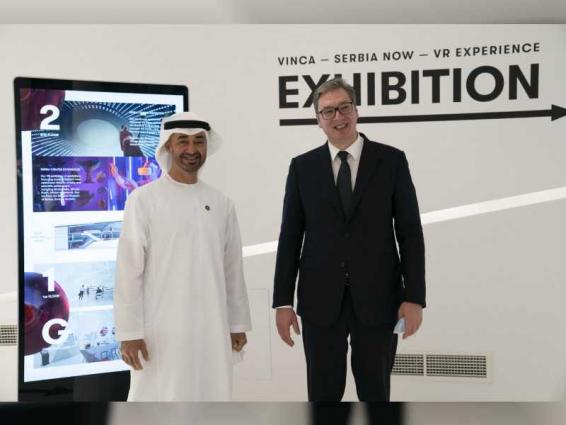 Upon arrival at the pavilion, His Highness Sheikh Mohamed bin Zayed was received by President of Serbia Aleksandar Vucic, who was present for the opening of his country’s pavilion.

Sheikh Mohamed expressed his happiness at meeting with the Serbian President. He also wished further development, prosperity and progress for the people of Serbia, and continued growth for UAE- Serbian relations.

During his tour, Sheikh Mohamed bin Zayed, accompanied by Vucic, was briefed about the pavilion, which mirrors the country’s culture, history and renaissance, to achieve the future aspirations of his people.

The Abu Dhabi Crown Prince hailed the pavilion’s organisational level and the content it contains in the innovation, creativity, information and communication technology sectors, as well as emerging companies areas, as it reflects the importance of technology in the development of civilisation, in addition to introducing the country’s ambitious vision for the future.

He also wished good luck of the organisers of the pavilion, in highlighting the image and achievements of their country to the world.