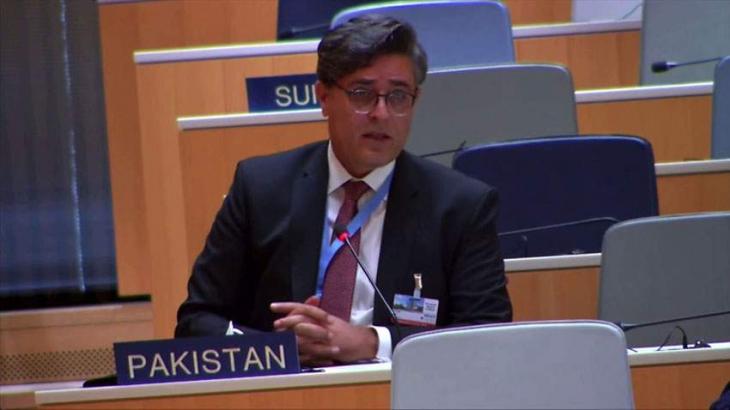 Participating in debate at the 47-member Council, Ambassador Khalil Hashmi, the permanent representative of Pakistan to the UN office in Geneva, has said that the human rights situation in the Indian Illegally Occupied Jammu and Kashmir has gone from bad to worse following Indian illegal steps of August 5, 2019.

ISLAMABAD: (UrduPoint/UrduPoint / Pakistan Point News-Oct 5th, 2021) Pakistan has urged the UN Human Rights Council to “speak and stand up” for the people of Indian Illegally Occupied Jammu and Kashmir to realize their right to self-determination.

Participating in debate at the 47-member Council, Ambassador Khalil Hashmi, the permanent representative of Pakistan to the UN office in Geneva, said the human rights situation in the Indian Illegally Occupied Jammu and Kashmir has gone from bad to worse following Indian illegal steps of August 5, 2019.

Ambassador Hashmi said the deplorable human rights abuses, Indian occupation and its illegal demographic changes in occupied Kashmir are clear violations of the declarations of Vienna Declaration and Programme of Action.

He said India‘s Hindutva regime has scaled up its suppression of the Kashmiri people flouting all fundamental human rights norms, principles and international law, as Indian forces continue to terrorize, summarily kill, and demolish homes with full impunity.

The Pakistan Envoy asked the UN human rights machinery, civil society and global media to continue to chronicle these signs and impressed upon India to comply with its obligations under international law by reversing its illegal actions of August 2019 and uphold fundamental rights of the Kashmiri people.

Meanwhile, Pakistan has drawn United Nations’ attention towards the threat to international peace and security posed by India’s Hindutva regime’s move to impose a ‘final solution” in Indian Illegally Occupied Jammu and Kashmir.

Ambassador Munir Akram, terming the Indian “fascist” regime’s actions as violation of the Security Council resolutions, called for plebiscite to enable the Kashmiri people to exercise their inalienable right to self-determination.

The Pakistani envoy said New Delhi has financed, facilitated and directed state-sponsored terrorism against Pakistan and other neighbours and to camouflage its crimes, it resorted to the world’s most notorious disinformation campaign.

He said India’s oppressive policies are accompanied by the quest for regional hegemony and “great power” status.

Munir Akram told the Committee that India has nuclearized the Indian Ocean; deployed anti-ballistic missile systems; acquired anti- satellite weapons; by spending 73 billion Dollars only last year and that 70 percent of all this weaponry is deployed against Pakistan.

He said Peace and stability in South Asia can be achieved through the resolution of the disputes between Pakistan and India.