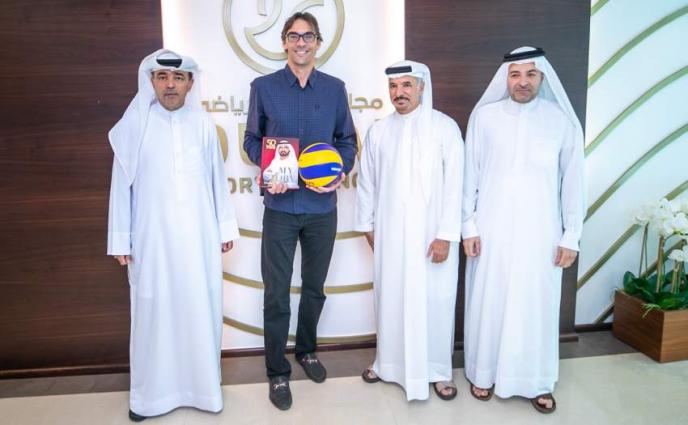 DUBAI (UrduPoint / Pakistan Point News – 13th Oct, 2021) Gilberto Amauri de Godoy Filho, widely regarded as one of the best volleyball players in history, is in awe following his visit to Expo 2020 Dubai with an official delegation from his south Brazilian state of Parana.

Popularly known as Giba, the 44-year-old made his debut for Brazil at the age of 18 in 1995 and won more than 30 top international competitions with the national team, including an Olympic gold and three World Championships, in his decorated international and club career before calling time in 2014 after a season with Dubai’s Al Nasr club.

Giba is back in Dubai as part of a 200-plus member delegation from Parana to Expo 2020, and he has been left amazed by what he has seen at the Expo site in his short stay.

“I visited Expo 2020 and it is unbelievable,” said Giba, who picked up the Most Valuable award at the 2004 Olympic Games and the 2006 FIVB World Championship, as well as at a number of other international competitions. “I am really impressed.

He continued: “We had a lot of work there, so I did not get a lot of time to visit many pavilions, But Netherlands and Russia, wow. They were incredible. Netherlands, Russia, Brazil, Singapore… they were unbelievable. I want to come back for sure.”

Giba has been a frequent visitor to Dubai since coming here for the first time in 2007 with his family for a vacation, but this visit is not the same as earlier ones. This time, he is looking to strengthen the bonds between UAE and Dubai through Expo 2020.

“I am in Dubai for Expo 2020 with an official delegation from my home state in Brazil, Parana,” he said. “It is one of the three states in the south of Brazil and we have come here with a delegation of more than 200 people to show how Parana can help the UAE with food and everything, development. Today, if I am mistaken than I am sorry, but I think 20 per cent of the world’s food comes from Parana. This is truly incredible.

“And it’s not just the food. We have champions like Emanuel Rego, who is a beach volleyball player; Agatha Bednarczuk won a (beach volleyball) silver medal in Rio (alongside Eduarda Santos). Ok, I have also won many kind of things. So we can develop and create connections between our countries, between our cultures. This is the most important thing we have come here to do.”

His Excellency Saeed Hareb gifted him a copy of “My Story” – the anecdotal memoir of His Highness Sheikh Mohammed Bin Rashid Al Maktoum, Vice President and Prime Minister of UAE and Ruler of Dubai. Giba was delighted to receive the book as he is a great admirer of HH Sheikh Mohammed Bin Rashid Al Maktoum, and loves how Dubai has transformed under his leadership into one of the world’s foremost cities, both for business as well as leisure.

The Brazilian has been an admirer of HH Sheikh Mohammed Bin Rashid since his playing days at Al Nasr, where he forged lifelong friendships with the likes of Yunus Sharif and others.

“The first time I came to Dubai was a long time ago,” he said. “I came here with my family for the New Year in 2007 and I really loved the city. After that I came back to play here for Al Nasr (in 2013-2014). Dubai is the last clip of my professional playing career around the world. I played in Italy, Russia, Argentina and Brazil, and I finished my career here in Dubai.

“After winning a gold and two silver medals in the Olympic Games, and three World Championships, I came to Dubai to develop volleyball, to show how amazing this sport of volleyball is, to show it is a family sport.

“When I came to Dubai, I wanted to settle here permanently, but God had other plans for me.”

He continued: “The most important thing for me at Al Nasr is that I have made really good friends. They are actually more than friends, they are brothers. I am here with Yunus Sharif and all those guys.

“Every time I come to Dubai, I spend all my time with them. I speak to them all the time when I am home. We call, we chat, we text. So I don’t say friends, I call them my brothers. We are like a family and this is the fifth time I am here to see my Dubai family.”

Giba was the lead star of the national team through what is called the Golden Era of Brazilian volleyball, when they won 11 major international competitions on the trot between 2002 and 2007, including five World League titles, two World Championships (2002, 2006), two World Cups (2003, 2007), the World Grand Champions Cup (2005) and the Olympic gold medal (2004).

Besides his collection of medals and trophies, Giba is also known for his humanitarian work. Diagnosed with leukaemia when he was six months old, he now works with children battling the disease. Giba is also known for his work in supporting orphans and children suffering from cancer. He is also an active campaigner against prostate cancer, and active in many other social responsibility projects.

President of Internationale de Volleyball’s (FIVB) Athlete Commission, Giba is hoping to return to Dubai in the near future to work with children here and support volleyball talents.

“In sports, we are all one big family. If you do something in sports at the school level, you actually create a connection with his entire family because, no matter how busy most people are, they will make sure they go to see their kids play and support them. Football, volleyball, basketball, whatever.”