Skip to content
تازہ ترین
Blinken, Zelenskyy Call For Peace In Donbas But Demand Ukraine Regains Crimea- State Dept. Boss Wins F**k with 8-5 job, I&rsquo;m opening my own cafe. Still in progress US Olympic Committee Says Appreciates Biden Support After Decision To Boycott Olympics A deer fought with another deer, and in doing so killed it. His antlers got stuck with his opponent, and now he carries his opponent's skull wherever he goes. PASGHETTI Office work in a nutshell Top US Defense Official Milley Meets With NATO Chiefs About European Security Developments Putin Ratifies Prolongation Of State Loan For Hungarian NPP Construction Until Late 2030 I don't usually express emotions in real life so i just wanted to upload it somewhere how happy i am 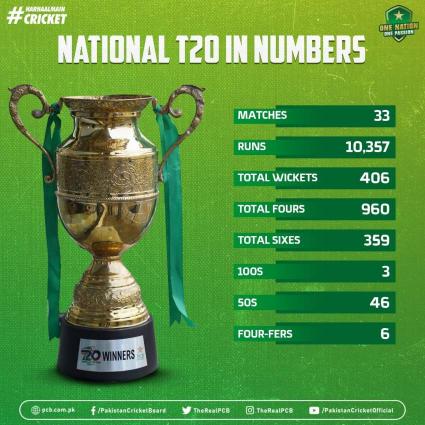 Here is a look at the records made during the action-packed tournament.

After having won National T20, Pakistan Cup and being joint-winners of the Quaid-e-Azam Trophy in the last season, they have begun the 2021-22 season with another National T20 silverware.

Khyber Pakhtunkhwa are only the fourth team after Sialkot Stallions, Lahore Lions and Peshawar, to win back-to-back titles in the history National T20.

A new record for Sahibzada Farhan

Khyber Pakhtunkhwa’s Sahibzada Farhan was a driving force behind his team’s title win. His 447 runs are the most by any batter in one edition of National T20, breaking Kamran Akmal’s record of 432 runs for Lahore Whites in 2017.

Farhan scored his runs at an average of 40.63, a strike-rate of 132.24 and with three 50s, including one in the semi-final against Northern. 2021 has been a terrific white-ball year for Charsadda-born batter as, at the start of the year, he also scored 487 runs at 54.11 and hit three centuries in the Pakistan Cup.

Player of the tournament and the final had a dream run in this National T20. Iftikhar Ahmed scored 45 not out off 19 balls and took three wickets for five runs in the final against Central Punjab and finished the tournament with 409 runs and eight wickets at an economy of 5.

57 (the best by anyone who bowled at least 10 overs in the tournament).

Iftikhar also hit 24 sixes, the most by anyone in this year’s edition, and had a tournament strike-rate of 170.41.

The most impressive aspect of Iftikhar’s runs scoring was his average of 102.25. The only batter in the tournament history with a higher average in one season is Salman Butt – 328 runs at 109.33 in the 2017 edition.

Wahab Riaz – the most prolific bowler

Wahab Riaz, who also captained Central Punjab in the absence of Babar Azam, became the most prolific bowler in National T20. During the course of his 12 wickets with an economy of 6.54, he went past Saeed Ajmal’s record of 89 wickets to become the highest wicket-taker in the tournament’s history.

Pakistan captain Babar Azam played only six games in this National T20 but that was enough for him to engrave his name in record books.

Babar also played an unbeaten knock of 105 off 63 balls against Northern becoming the first batter from Pakistan to register six centuries in the format. He went past the tally of Ahmed Shahzad and Kamran Akmal, who have five centuries each in T20 cricket.