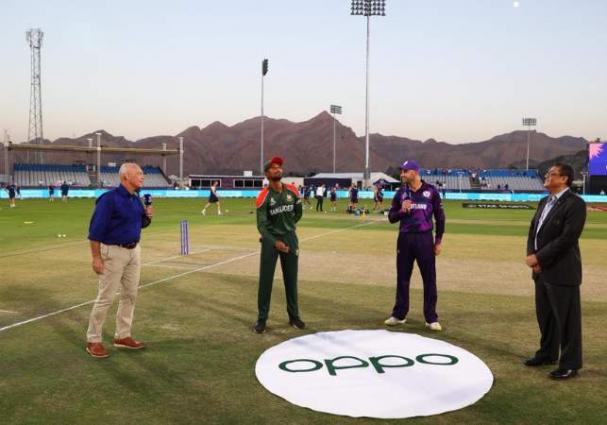 Both Bangladesh and Scotland are determined to show excellent performance today in the 2nd  match of T20 World Cup.

The latest reports show that there’s very little history between Bangladesh and Scotland, but going by the lead up to this tournament, Scotland will come in buoyed. In the warm-ups, Scotland registered wins in a high-scorer against Namibia and in a low-scorer against Netherlands, while Bangladesh were downed by Sri Lanka and Ireland.

Bangladesh will face a Scotland side that has had a mixed bag in T20Is of late, with three defeats in their last five T20Is, including a home series loss to Zimbabwe in September, but, given their results in the warm-ups, head coach Shane Burger believes his side is peaking at the right time.

Mahmudullah will not only dictate terms in the field as the Bangladesh captain, but his batting could make or break big finishes too. He was the only batter to get a half-century in Bangladesh‘s T20I series win over Australia and was also their top-scorer against New Zealand.

Scotland will look for quick, early runs from George Munsey whose T20I career strike rate of 153.36 speaks volumes of his big-hitting ability. The left-hand batter with the low grip can clear the infield with ease, both against pace and spin, and could give the likes of Berrington and Coetzer the right platform.

Soumya Sarkar’s form puts him ahead of Mohammad Naim, who hasn’t looked in good touch lately. Playing three seamers in Muscat may be the way to go, which would leave Nasum Ahmed out of the XI. Shoriful Islam’s variety may be preferred over Taskin Ahmed.

Scotland have the option of legspinner Chris Greaves after his four-for against Netherlands in the practice match. Hamza Tahir, the left-arm spinner, wicketkeeper-batter Craig Wallace and fast bowler Brad Wheal are also options available to them.

Scotland have won the sole T20I between the two sides, although Bangladesh won all four completed ODIs while Bangladesh have won only five out of 25 completed matches at the T20 World Cup.