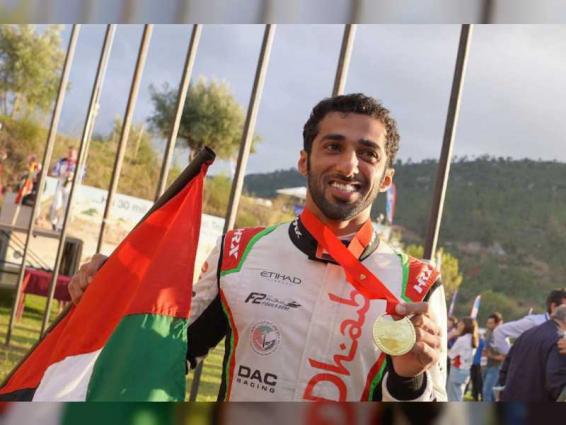 Starting from pole position, the brilliant Emirati driver completely dominated the final round of the series at Vila Velha de Ródão, winning by the commanding margin of 8.686 seconds from the host country’s defending world champion, Duarte Benavente.

Mansoor Al Mansoori, another member of the endurance title-winning crew three months ago, was unfortunate to go out of the race after 18 laps, but has shown enough in his debut season to suggest he can become a real force with Team Abu Dhabi.

Al Qemzi had made a decisive move by winning Portugal’s penultimate round at Ribadouro a week earlier to within two points of Lithuania’s championship leader, Edgaras Riabko.

That meant victory today would guarantee another F2 crown for the 2017 and 2019 champion, and Al Qemzi reinforced his prospects with a second successive pole position yesterday while Riabko qualified down in 11th place, effectively ending his challenge.

From the start on the 1,577m Tagus river course today, Al Qemzi looked in a class of his own, powering his way into an immediate lead and at one stage building a huge advantage of 13 seconds over Benavente before relaxing his pace towards the end.

The Portuguese driver finished runner up in the championship, just ahead of Riabko who was placed eighth on the day.

Ten-times former F1H2O champion Cappellini, who celebrated with Al Qemzi at the finish, has had a major influence on the former Nations Cup and F4-S world champion, and the rest of the team’s Emirati drivers.

This was never more evident than when Al Qemzi combined with his cousin, F1H2O veteran Thani Al Qemzi, and Mansoori, to land the team’s second successive world endurance triumph earlier in the season.

Thani Al Qemzi leads the UIM F1H2O standings after his opening round victory in Italy from team-mate and defending champion Shaun Torrente, with the drivers and team championships in their sights.

Torrente will also partner Faleh Al Mansoori in a bid to regain the UIM XCAT World Championship at the Fujairah Grand Prix from 29 November to 4 December.