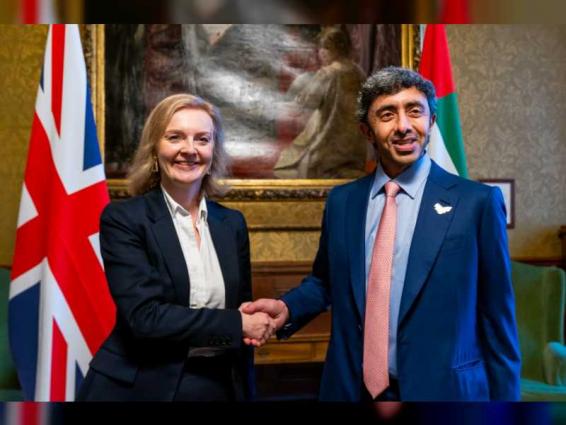 The friendship ties between the UAE and the United Kingdom and ways to enhance the prospects of cooperation in all fields, including economic, trade, investment and climate change, featured high during the meeting.

The two top diplomats affirmed the determination of their countries to strengthen their strategic partnership, especially following the recent visit of His Highness Sheikh Mohamed bin Zayed Al Nahyan, Crown Prince of Abu Dhabi and Deputy Supreme Commander of the UAE Armed Forces, to the United Kingdom, and his meeting with Boris Johnson, Prime Minister of the United Kingdom, and the announcement of the ‘Partnership for the Future’ between the two nations.

They also discussed the situation in the middle East region and a series of international issues of common interest.

Sheikh Abdullah underlined the longstanding relations between the UAE and the United Kingdom, noting that the “Partnership for the Future” is conducive to creating promising opportunities for joint cooperation and contributes to achieving sustainable prosperity and strengthening international peace and security.

The meeting was attended by Ambassador of UAE to Abdullah Khalfan Juma Balhoul.