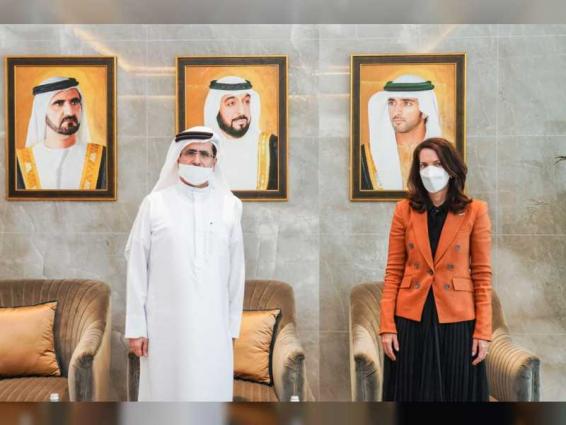 Al Tayer stressed the importance of promoting cooperation between DEWA and public and private American companies in clean and renewable energy and water, as well as enhancing bilateral relations through sharing global best practices and benchmarking between DEWA and American organisations.

In his meeting with Gregonis, Al Tayer highlighted DEWA’s key projects, initiatives and plans to achieve the vision of the wise leadership, to increase the share of clean and renewable energy. This is in line with the Dubai Clean Energy Strategy 2050 to provide 75% of Dubai’s total power capacity from clean energy sources by 2050. DEWA is also harnessing all its capabilities to keep pace with the Fourth Industrial Revolution and disruptive technologies to contribute to making Dubai a smart city. This is achieved by providing the best government services. DEWA’s initiatives and projects aim to enhance Dubai’s global competitiveness, especially in renewable and clean energy, sustainability, and green economy.

The Solar Park’s projects constitute one of the key pillars of the Dubai Clean Energy Strategy 2050.

Al Tayer also talked about the Green Hydrogen project, which DEWA commissioned at the Mohammed bin Rashid Al Maktoum Solar Park in Dubai. This is the first pilot project of its kind in the middle East and North Africa to produce green hydrogen, one of the most promising sources of energy and among the environmentally friendly sources, which constitute one of the pillars of a sustainable future that depends on accelerating the transition to carbon neutrality and achieve a green economy by developing green mobility, and reducing carbon emissions across various industries.

Al Tayer talked about the 250MW power plant using hydroelectric pumped storage technology in the mountainous area adjacent to the Hatta Dam. He also highlighted DEWA’s study to produce energy using wind power, in addition to the smart grids. DEWA has adopted a strategy to enhance energy efficiency. It also has a clear strategy for demand side management, which seeks to reduce electricity and water demand by 30% by 2030.