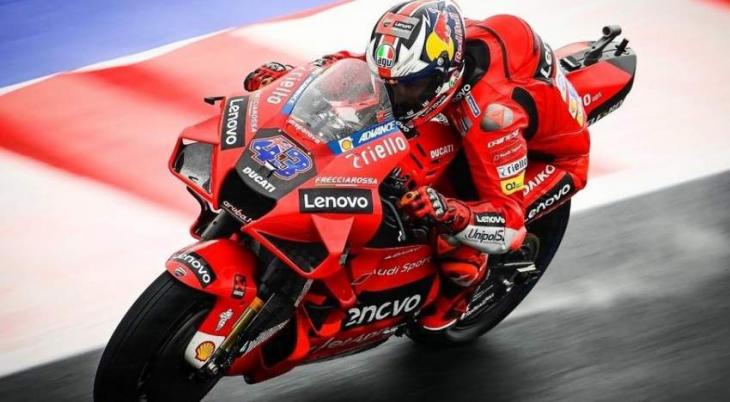 Jack Miller dominated the first day of practice for the Emilia-Romagna Motorcycle GP on Friday, while Fabio Quartararo, who could clinch the title this weekend, was outside the top ten

Misano Adriatico, Italy, (APP – UrduPoint / Pakistan Point News – 22nd Oct, 2021 ) :Jack Miller dominated the first day of practice for the Emilia-Romagna Motorcycle GP on Friday, while Fabio Quartararo, who could clinch the title this weekend, was outside the top ten.

On a track still wet following rain in the morning and at the start of the afternoon session, Australian Miller set a time of 1 min 41.305 on his factory Ducati.

He was a huge 0.927sec faster than Frenchman Johann Zarco of Ducati’s satellite Pramac team.

Spaniard Aleix Espargaro on a Aprilia was another 0.059 back.

Quartararo was 16th fastest at 1:43.09 and will need to gain six places on Saturday morning to advance directly to the qualifying session for the top 12 places on the grid.

“I’m not going to rush myself (in pursuit of the title),” said Quartararo who has a 52-point lead in the championship.

“The most important thing is to be calm, not to make mistakes. If it does not happen here, it will be next time in Portimao (Portugal).” The French rider’s closest rival in the championship, Francesco Bagnaia, crashed his Ducati in the morning but was eighth in the afternoon.

The Italian said that was deceptive because he exceeded track limits on the way to a fast time at the end of the afternoon.

“I finished only eighth, but only because I couldn’t complete my last lap,” he said. “I could have been second.” But with rain forecast for Saturday he said he was happy with his position.

“The important thing will be trying to stay in the top ten tomorrow morning, which could be held in the wet”.

Also missing from the top ten were Spaniards Joan Mir (Suzuki) in 11th and Marc Marquez (Honda) who was 14th.

“It wasn’t the best session for us,” said Rossi, explaining he prefered the wet conditions in the morning to the drying track in the afternoon.

With two races to go after this weekend, and 25 points for victory, Quartararo leads Bagnaia by 52 points and could clinch the title this weekend.

At 22 it would be his first title and a first ever for France in the premier class of motorcycle racing.

This is the second race at the track in five weeks. Bagnaia beat Quartararo in milder weather in the San Marino GP n September.

Rossi, based in Tavullia, some 20 minutes from the circuit, is making his final appearance in front of his home crowd before retiring at the end of the season. He won at Misano in 2008, 2009 and 2014.