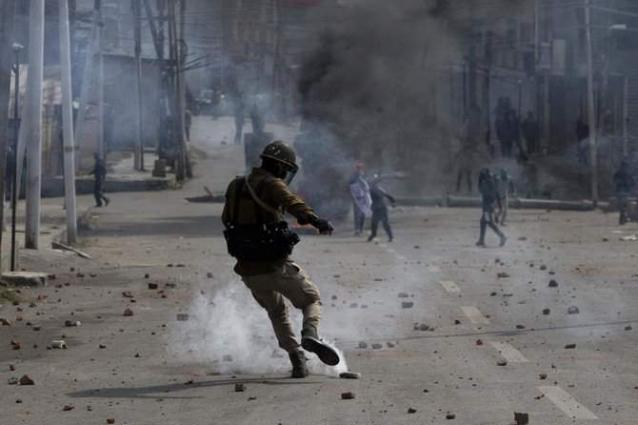 Almost 74 years passed in partition of the Indian sub-continent, but the Kashmir dispute between the two nuclear power states Pakistan and India is still unresolved mainly due to non-serious attitude of the international community, rather the issue has become a permanent threat to regional peace and prosperity

ISLAMABAD, (UrduPoint / Pakistan Point News – 25th Oct, 2021 ) :Almost 74 years passed in partition of the Indian sub-continent, but the Kashmir dispute between the two nuclear power states Pakistan and India is still unresolved mainly due to non-serious attitude of the international community, rather the issue has become a permanent threat to regional peace and prosperity.

Pakistan and India fought a series of wars since gaining their independence from Britain in 1947, largely over the Kashmir region at present; the relations of two nuclear states are not good enu ough, especially after the August 5, 2019‘s unilateral decision by India.

There were numerous crimes against humanity , committed by the Indian occupation forces, including thousands of massacres since 1989, mass rape of Kashmir women of Kunan, Pashpora, dilemma of “Half widows”, mass blinding and physical tortures, all documented by the international human rights organizations.

On October 27, 1947, the sufferings of Kashmiri people commenced with the landing of Indian troops in Jammu and Kashmir which has been increased manifold after New Delhi suspended the special status of IIOJK through revoking Articles 370 and 35-A of Indian Constitution on August 5.

Pakistanis and Kashmiris across the globe observe, October 27 as black day every year. This was the day when in 1947 the Indian forces illegally landed in the state of Jammu and Kashmir, and together with Patiyala troops , already illegally present in Kashmir, Indian Dogra forces and RSS terrorists carried out the genocide of over 300,000 Kashmiris and displaced over one million Kashmiri Muslims.

Since then, people of Indian Illegally Occupied Jammu and Kashmir (IIOJK) are struggling to get their legitimate right of self-determination as promised by the world powers at their top forum, the United Nations (UN).

When the Kashmir dispute was intentionally crafted in 1947-1948, the United States, Britain, China, France, Canada, Argentina, Belgium and Columbia championed the stand that the future status of Kashmir must be ascertained in accordance with the wishes and aspirations of the people of the territory.

Accordingly, the UN Security Council on April 21, 1948 adopted a resolution. The basic formula for settlement of the issue was incorporated in the resolutions of the UN Commission for India and Pakistan (UNCIP) adopted on August 13, 1948 and January 5, 1949.

These were not the routine resolutions as their provisions were negotiated in detail by the UN Commission with India and Pakistan after getting the consent of both the governments, constituting a binding and solemn international agreement about the settlement of the Kashmir dispute.

Prime Minister Imran Khan while addressing 76th session of the United Nations General Assembly said India‘s actions in Occupied Jammu and Kashmir amounted to “war crimes” and the “crimes against humanity” and regretted the world‘s “selective” approach owing to its corporate interests.

“It is unfortunate, very unfortunate, that the world‘s approach to violations of human rights lacks even-handedness, and even is selective,” the prime minister said in his address.

Imran Khan said India was violating the international human rights laws including the 4th Geneva Convention and pointed that “geopolitical considerations and corporate interests” had compelled the major powers to overlook the transgressions of their “affiliated” countries.

“Such double standards are the most glaring in the case of India, where this RSS-BJP regime is being allowed to get away with human rights abuses with complete impunity,” he said.

Imran Khan said India had undertaken a series of illegal and unilateral measures in the Occupied Jammu and Kashmir since August 5, 2019.

He mentioned that India had unleashed a reign of terror by an occupation force of 900,000, jailed senior Kashmiri leadership and imposed a clampdown on media and the internet.

He said the abduction of 13,000 young Kashmiris, extra-judicial killing of hundreds of innocent Kashmiris in fake “encounters” and collective punishments by destroying entire neighborhoods and villages was a norm.

Khan said the UN resolutions clearly prescribed that the “final disposition” of the disputed territory should be decided by its people, through a free and impartial plebiscite held under the UN auspices.

Dr Ghulam Nabi Fai, a prominent Kashmiri leader, wrote in one of his articles. We are dismayed by the lack of action by the world powers to help stop the carnage in Kashmir and by their virtual indifference to the situation in our land,” Kashmir, he said, was the only international dispute where the solution of the conflict ‘right to self-determination’ was suggested by the parties themselves, India and Pakistan.

After going through the decades-long physical and mental agony, now the people of IIOJK are facing the worst type of repression at the hands of Modi-led fascist government which has stripped the held territory of its special status, on August 5 last year, by revoking Articles 370 and 35-A to change its demographic apartheid.

It is quite clear that New Delhi took this illegal, immoral and unconstitutional action out of frustration as its around-the-clock curfew, communication blackouts, arrests and killings and forceful suppression of protesters fell flat before the indomitable spirit and struggle of the Kashmiri people, whose commitment gets stronger with every intensive move of the so-called secular state.

The world community knows very well the tragic story of the IIOJK where around one million Indian troops are continuously putting the innocent Kashmiris under siege, killing and raping children and women with impunity and denying every fundamental right.

Acknowledging the measures taken by Pakistan senior leader of All Pakistan Hurriyat Conference (APHC) Syed Mushtaq Gilani said now the ugly face of India and its so-called claim of being a secular state had fully been exposed before the world.

Had Pakistan not adopted a proactive approach to effectively highlighting the lingering issue of Kashmir after the August 5 actions, he said, the world would have never realized the sinister designs of India in IIOJK.

“Now, it is the prime responsibility of the international community, especially the influential countries, to come forward and play their due role in giving the people of Indian Illegally Occupied Jammu and Kashmir their legitimate right of self-determination, which has been denied since 1947,” he said in an interview with APP.

Hurriyat leader, Altaf Ahmad Bhat while talking to APP said that people of Kashmir are struggling against the Indian occupied forces since their intervene and will continue to fight against occupied till the achieving of dream of independence from the clutches of Indian forcesHe termed 2019‘s move of scrapping the special status of IIoJK was aimed at suppressing Kashmiri’s struggle for independence that continued for the last 74 years and reached the turning point now however the people of IIoJK strongly rejected the annexation or division of the region.

“Not only those Kashmiris who were the part of the struggle against Indian atrocities and demanding the right to self-determination and referendum since the last many years opposed this move but also those who were part of Indian politics including Omer Abdullah, Ghulam Nabi Azad, Naghma Mufti, and Sajjad Mohan and many others didn’t accept this decision”, he observed.