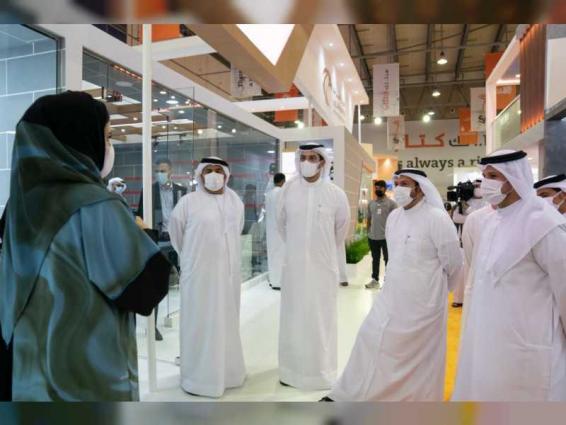 He inspected a number of pavilions of a group of bodies, institutions and centres, informing officials of the participation of these bodies and the publications, rare references, books and various programmes that presented in the exhibition.

During his visit to the Sharjah Broadcasting Authority’s pavilion, Sultan bin Ahmed was briefed on the authority’s various programmes and coverage, and what it conveys to the public everywhere through its direct dialogues, and interviews with guests from inside the exhibition.

Sheikh Sultan stopped at the Canadian pavilion, where he listened to a detailed explanation of various books it offers for children and adults, and the importance of the Sharjah International Book Fair for Canadian Publishers in increasing the spread of Canadian books and publications in Sharjah and the region in general.

During the tour, the Deputy Ruler of Sharjah inspected the pavilion of the Emirates Publishers Association, listening to the programmes and publications of the association, its local activities and the efforts to develop the publishing industry locally.

Sheikh Sultan’s tour of the exhibition also included a number of other pavilions, including Sharjah Police General Command, Sharjah Documentation and Archives Authority, Arabic Language academy, the Department of Culture, the Ministry of education, the Supreme Council for Family Affairs, the Judicial Department, and the National Archives in the Ministry of Presidential Affairs and Al Qasimia University Pavilion.