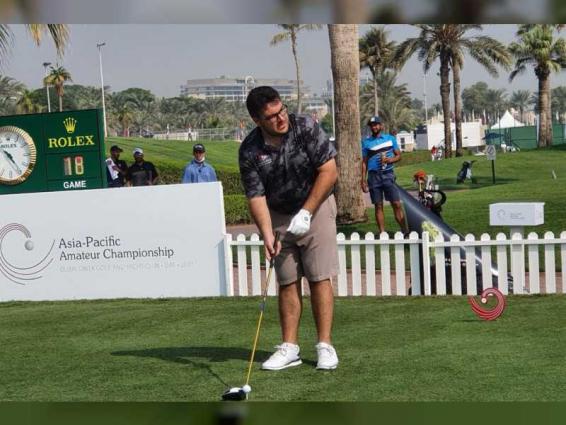 DUBAI, (UrduPoint / Pakistan Point News / WAM – 04th Nov, 2021) The UAE’s No.1 golfer Ahmad Skaik, the sole representative for the host nation and the Gulf region at this week’s 12th Asia-Pacific Amateur Championship (AAC), remains in contention after comfortably making the cut on day two of the tournament at the Dubai Creek Golf & Yacht Club.

Skaik, who carded a level-par 71, started off with three pars and a birdie. Despite a bogey on hole seven, Skaik briefly moved to four under par overall and within touching distance of the leaders after two further birdies on holes 10 and 14.

The UAE hope’s challenge was hindered late on by dropped shots on holes 16 and 18 – both after three-putting from the fringe – and ended the day on level par to reach the clubhouse well placed for the weekend on a respectable two-under par score of 142.

Skaik was happy to stay in contention, and admitted he doubted his chances ahead of the tournament. “It was a struggle out there,” he said. “I didn’t hit it well. I struggled off the tee and with my irons. My putting was on and my wedges, so that helped me keep going.

I’m very happy because coming into this I didn’t think I was going to make the cut because I’ve not been playing well. I had a lesson with my coach two days before the tournament and I felt much better, and in control of my game, so I’m happy to be here.”

Compatriot and UAE national team captain Khalid Yousuf began the day with work to do after carding an opening round 76. After a solid start, Yousufwas left to rue a quadruple bogey eight on hole four that ultimately led to a round of 75 to end his chances of making the cut.

Fellow UAE players Khalifa Al Masaood and Rashed Al Emadi also missed the cut with 10 over rounds of 81, while Khalifa Almaraisi of Bahrain also looks to be heading out on +3 despite picking up four birdies in an eventful round of 75.

Clubhouse leader Bo Jin of China carded a bogey-free seven-under par round of 64 to go eight under par for the tournament, six strokes ahead of Skaik, while Thailand’s Puwit Anupansuebsai also fired a 64 in a round that included an eagle, seven birdies and two bogeys to sit on five under par overall.