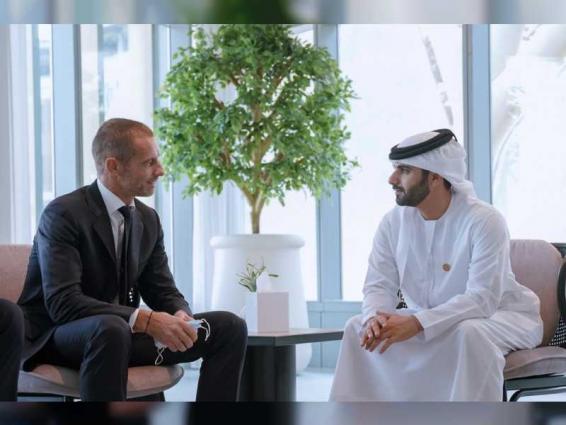 During the meeting, Sheikh Mansoor stressed on the significant role that the sports sector plays in the global economy and in empowering communities, in addition to providing employment opportunities for millions of workers in clubs, federations, academies and other related entities.

Sheikh Mansoor underlined the UAE’s commitment to work with the international community to organise major initiatives that bring the world together to share experiences and expertise. DSC annually hosts the Dubai International Sports Conference, a global platform for the development of football and organises training and mentoring sessions to develop football skills.

“Dubai Sports Council is keen to contribute to the development of football both in the region and across the world by strengthening its cooperation with international federations, clubs and institutions,” he said.

Ceferin said he looked forward to working closely with the Dubai Sports Council to develop football and enhance its role in creating new economic opportunities across the world.

The meeting reviewed upcoming international events and efforts to enhance the status of European and international football, and provide the best atmosphere for its employees at clubs and institutions, as well as players, coaches and workers in all disciplines.

At the end of the meeting, H.H. Sheikh Mansoor bin Mohammed presented the Dubai Sports Council shield to the President of UEFA, in recognition of the role played by the Union in developing football.