Skip to content
تازہ ترین
Historic Reforms Introduced In Justice System By PM: Farrukh Offended in 3..2..1 And she IS the coolest Cambodia Launches Campaign To Revive Pandemic-hit Tourism Industry They've done it again Etisalat Crowned As The Strongest Telecom Brand In The World Buy snacks, I must. You think dinner is for free? US Naval Ships Whirwind, Squall Arrive At Karachi Port Russia Confirms 88,816 New COVID-19 Cases Over Past 24 Hours – Response Center 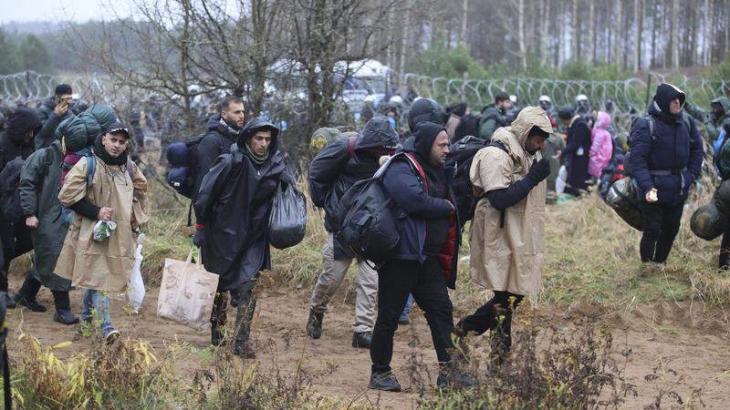 On October 29, the Belarusian State Border Committee said Lithuanian border security officers physically dragged Iraqi migrants to the border with Belarus and threatened to shoot them if they attempted to return.

“There was no firing at our borders. And our officers did not use any weapons. Even if firing (of weapons) can be heard, it probably comes from the side of Belarus,” Adomenas said on air with Russian radio station Ekho Moskvy (Echo of Moscow).

The minister noted that the only aggression that could be observed at the border with Belarus comes from Belarusian border guards and special services who threaten the refugees.

Adomenas added that Lithuanian border guards only have the authority to detain border violators and not shoot at them.

Polish border guards have accused Belarusian soldiers of staging “provocations” at the border, such as shooting blank cartridges in their direction and throwing explosives. Adomenas stressed that neither Lithuanian nor Polish border guards used, or attempted to use weapons aimed at refugees.

Since summer, Lithuania, Latvia, and Poland have reported an increase in the number of people illegally crossing the border from Belarus, accusing the country of using migrants as a “hybrid weapon” against the bloc after it imposed sanctions on Minsk. Belarus, in turn, said that it could no longer suppress migration to neighboring countries due to lack of resources caused by Western sanctions against the country.