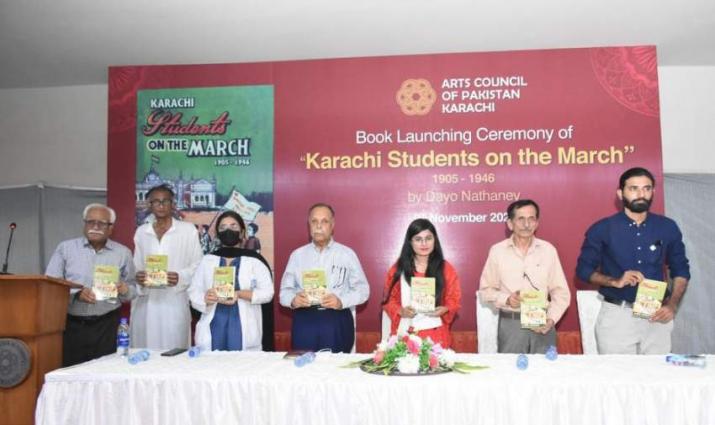 A book on students movement in Sindh especially Karachi from 1905 – 1946 has been reprinted, the launch was held at the Arts Council

Karachi (UrduPoint / Pakistan Point News – 11th Nov, 2021) A book on students movement in Sindh especially Karachi from 1905 – 1946 has been reprinted, the launch was held at the Arts Council.
Speaking on the occasion prof.

Aijaz Farooqi said that from 1905 to 1946 many students in this party grew up to become leaders, there was a need to translate this book into Urdu as well as Sindhi, he said.
Senior Journalist Sohail Says “Despite some missing pages this book seems complete to me” he further said, Muslim league was formed in 1906 and the greatest movement of Sindh was begun at Sindh University in the year 1967.
Waqas Anagria, a leftist student researching Marxism, said that the book shows how the student held their ground while making others agree with their terms.

“The main task of the student organizations is to revive the dead consciousness in this society” he added.

Sharing her views Virsa Pirzada said that in the past, students struggled a lot and we must read this book so that the young generation can understand its importance.
“Today’s students are the citizen of tomorrow and they want to be at the forefront in the service of the country,” said M.

Irfan. He also read the translation of the manifesto based on the student’s rights.
Writer Aslam Khuwaja said that the book consists of the story of the student’s movement from 1905 to 1946, which people don’t know about.

When I found the book it was missing several of its last pages and since then we have been trying to find a copy of it that is complete but after finding it everywhere we decided to publish the book as it is. The event was moderated by Dr. Tauseef Ahmed.