Skip to content
تازہ ترین
Roses are Red, Violets are Blue. No woman in bed, any ghosts will do. This is not a Caterpillar. Ayub Teaching Hospital Prepared To Tackle The Threat Of Omicron Variant: Dr. Alem Zeb Russias Penitentiary Service Seeks Real Prison Term For Navalnys Brother – Court Chinas President Xi Meets IOC President Thomas Bach In Beijing: State Media Welcome to the jungle! Bought this brutal bicycle light so I can go mountain biking after work during the week, but I found out that I'm scared being alone in the woods at night Even a simple scene needs some preperation. London Police Probing Downing Street Lockdown Parties Poland Begins Work On New EU-Belarus Border Wall 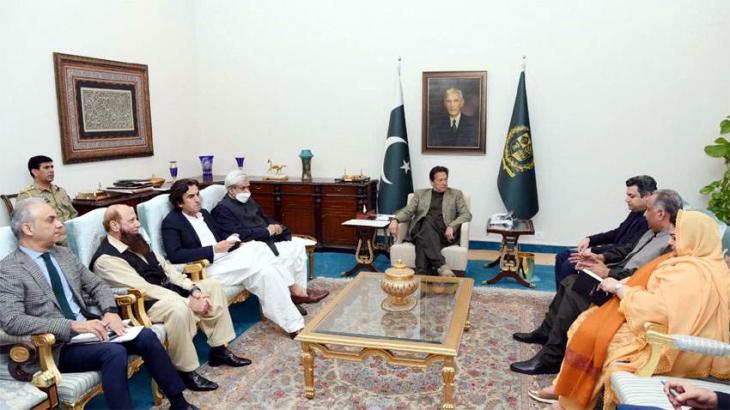 ISLAMABAD: (UrduPoint/UrduPoint / Pakistan Point News-Nov 12th, 2021) Prime Minister Imran Khan has underlined the importance of solving problems of farmers and directed to take immediate steps to stop pilferage of water in the canals.

Talking to a delegation of farmers from Southern Punjab in Islamabad, he emphasized on decrease of middlemen’s role enabling the farmers to get good price of their products.

The Prime Minister further directed the authorities concerned to invoke relevant laws to deal with cartelization and to shun hoarding practices.

The Prime Minister said that in order to explore full potential of the agriculture sector, the government has launched Agriculture Emergency Program worth 277 billion rupees, an unprecedented allocation for the sector.

This initiative is aimed at enhancing the productivity of wheat, rice, sugarcane, pulses, and oilseed crops; besides developing livestock and water sectors.

Imran Khan said the government is also extending Kissan Cards to farmers, especially the smaller ones, for modernizing the agriculture sector and farmers will get benefits of various government programs such as crop loans and subsidies on fertilizers, seeds and pesticides through this card.