Skip to content
تازہ ترین
Recently met this person with a large private collection of minerals and fossils and this is a dinosaur egg nest Roses are Red, Violets are Blue. No woman in bed, any ghosts will do. This is not a Caterpillar. Ayub Teaching Hospital Prepared To Tackle The Threat Of Omicron Variant: Dr. Alem Zeb Russias Penitentiary Service Seeks Real Prison Term For Navalnys Brother – Court Chinas President Xi Meets IOC President Thomas Bach In Beijing: State Media Welcome to the jungle! Bought this brutal bicycle light so I can go mountain biking after work during the week, but I found out that I'm scared being alone in the woods at night Even a simple scene needs some preperation. London Police Probing Downing Street Lockdown Parties 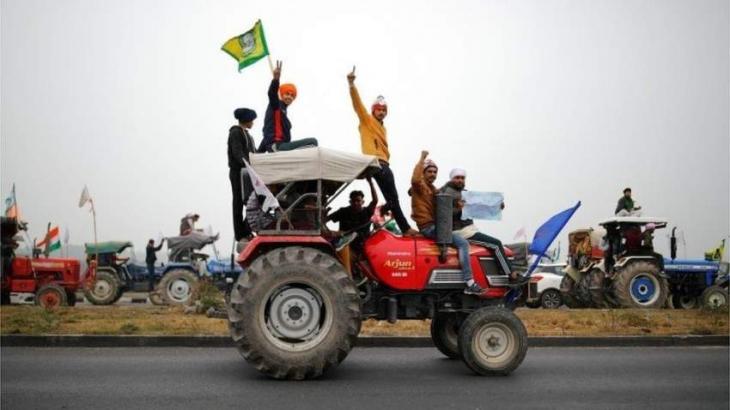 The Indian Prime Minister says they will complete the constitutional process to repeal these three agricultural laws in the parliament session starting later this month.

NEW DELHI: (UrduPoint/UrduPoint / Pakistan Point News-Nov 19th, 2021) Indian Prime Minister Narendra Modi said on Friday he had decided to repeal three controversial farm laws against which farmers have protested for more than a year, a significant climbdown by the government.

“Today I have come to tell you, the whole country, that we have decided to withdraw all three agricultural laws,” Modi said in an address to the nation.

“In the parliament session starting later this month, we will complete the constitutional process to repeal these three agricultural laws.”

The legislation the farmers object to, introduced in September last year, deregulates the sector, allowing farmers to sell produce to buyers beyond government-regulated wholesale markets, where growers are assured of a minimum price.

Small farmers say the changes make them vulnerable to competition from big business, and that they could eventually lose price support for staples such as wheat and rice.

The government says reform of the sector, which accounts for about 15% of the $2.7 trillion economy, means new opportunities and better prices for farmers.

The laws were to empower small farmers, but the government failed to convince some farmers who have been opposing the new laws, Modi said.