Skip to content
تازہ ترین
World is soo unfair, my hanging balls're also not helping at all IHC Adjourns Till March 3 Hearing Of Indian Spy Kulbhushan Jadhav They are not even playing the same sport. Thailand Rushes To Contain Oil Spill After Undersea Leak Dubai Customs Celebrates International Customs Day Can you find out who's who in this riddle? Medvedev Says Direct Russia-Nato Clash Scenario Over Ukraine Would Be Most Catastrophic Covid-19 Claims 25 More Lives In Pakistan During Last 24 Hours Five Killed In Ukraine In Shooting By Serviceman Of National Guard – Interior Ministry Well done folks 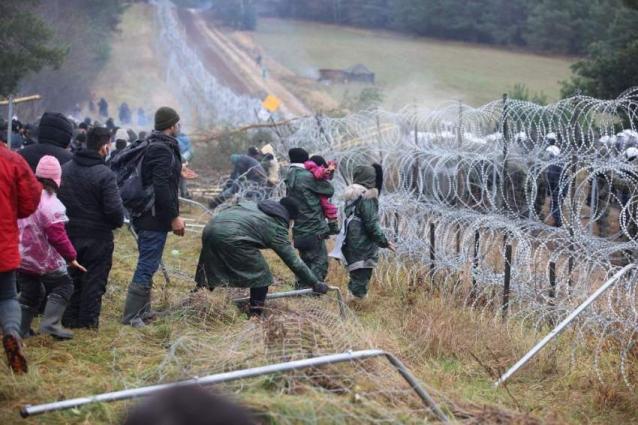 Poland’s border guards detained 45 migrants who attempted to cross the border from Belarus overnight, a spokeswoman said on Friday, adding that they were part of two larger groups hurling rocks and tear gas

A group of around 500 people attempted to breach the border on Thursday evening near Dubicze Cerkiewne, Border Guard spokesperson Lieutenant Anna Michalska told AFP on Friday.

“People in this group threw rocks and someone also hurled tear gas at Polish officials. At the same time the Belarusian personnel were using lasers to blind them,” she said.

“The Belarusian side is supplying the migrants with the tear gas, it’s obvious they didn’t bring it from their countries of origin,” Michalska added.

Four Polish soldiers sustained injuries that did not require hospitalisation, she said.

Since the beginning of the year, Poland‘s border guard service says it has recorded over 34,000 attempted crossings from Belarus, including over 6,000 so far in November, nearly 17,300 in October, close to 7,700 in September and over 3,500 in August when the crisis began.

While there has been a decline in the number of attempted breaches over the last month, Michalska said the “latest attempts have become more aggressive.” A makeshift migrant camp on at the Bruzgi border crossing was been cleared, Minsk said Thursday, as hundreds of Iraqis who failed to make the crossing to enter EU member Poland were flown home, mostly to Iraq.

The EU has accused Belarus of artificially engineering the crisis by encouraging migrants to come to the country with the promise of an easy crossing into the European Union.