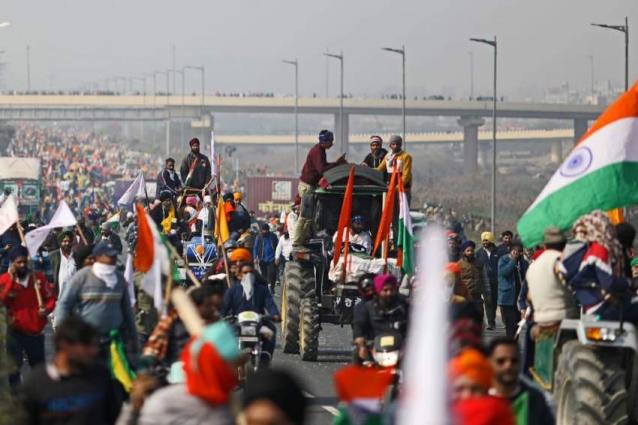 Indian Prime Minister Narendra Modi’s U-turn following the massive protests by farmers against the agricultural laws introduced by him represents one of the “biggest setbacks” of his 7-year rule, according to The Wall Street Journal, a leading American economic and financial newspaper

NEW YORK, (APP – UrduPoint / Pakistan Point News – 19th Nov, 2021 ) :` Indian Prime Minister Narendra Modi‘s U-turn following the massive protests by farmers against the agricultural laws introduced by him represents one of the “biggest setbacks” of his 7-year rule, according to The Wall Street Journal, a leading American economic and financial newspaper.

“Mr. Modi has implemented some major changes, but with mixed results,” the newspaper said as the Indian leader “bowed” to the protestors, who are mainly Sikhs, to repeal those laws that they said would adversely affect them.

“In 2016, he stunned the country with a demonetization policy that scrapped nearly 90% of its paper Currency by value, a move that economists say battered small businesses and scarred the economy,” WSJ correspondent Rajesh Roy wrote from New Delhi.

“The next year, a dramatic revamp of the country’s tax system sought to streamline the complex morass of state and Federal levies. Although the rollout was messy, the nationwide system did simplify life for some companies.” As Modi backed down, the dispatch said organizers of the protests against the farming laws have shown no signs of relenting, and plans were already under way for marches in state capitals and toward Parliament on Nov. 26.

New Delhi also did itself no favours, with sometimes harsh crackdowns on demonstrations, the newspaper said citing analysts.

“In October, eight people were killed in a deadly melee during a farmers’ protest in the northern state of Uttar Pradesh. The police have accused the son of one of Mr.

Modi’s ministers of firing on the crowd of protesters.” “It was becoming embarrassing,” Himanshu, an associate professor of economics at Jawaharlal Nehru University in New Delhi, was quoted as saying. The repeal “was a face-saving measure that the government took.” Himanshu, who goes by one name, said Modi’s decision is clearly motivated by concern that angry farmers will endanger the BJP in key elections next year in states such as Uttar Pradesh. A victory in Uttar Pradesh, the country’s most populous state, could help Modi’s party strengthen its hold on the upper house of Parliament.

But The Wall Street Journal pointed out that this wasn’t the first time Modi has been forced to retreat on his policies. In 2015, Modi said he would abandon an executive order related to a land-acquisition bill, which was aimed at smoothing the way for states to acquire land for infrastructure or industry needs. The decision followed months of protests and came ahead of elections in the eastern state of Bihar.

The report cited Samyukt Kisan Morcha, one of the key farmer unions, as saying it would closely watch the repeal process. The union also repeated its demands that the government guarantee a minimum price on all agriculture products, instead of just a few.

Rahul Gandhi, the leader of the opposition Congress Party, called the decision was a victory against injustice. “The country’s food providers have made arrogance bow its head through nonviolent resistance,” Gandhi tweeted Friday.

Shaheen Afridi Says Pacers Can Get Angry On Pitch

Coronavirus: Govt Deliberates Over Shutting Down Schools For Children Under 12 Years Of Age