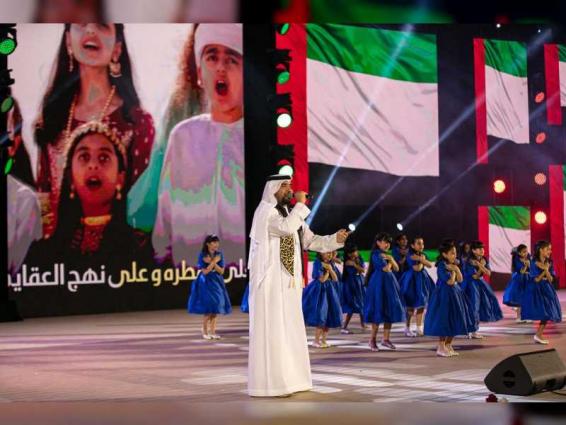 (UrduPoint / Pakistan Point News / WAM – 25th Nov, 2021) SHARJAH, 24th November 2021 (WAM) – The UAE’s 50th National Day celebrations, organised by the Sharjah National Day Celebrations Committee, kickstarted yesterday evening at the Khorfakkan Amphitheatre in the eastern coastal city of Sharjah, with the staging of a brilliant operetta, The Jubilee of Pride. With great fervour and joy, the UAE community marked their sense of belonging and pride in the homeland as they enjoyed a range cultural performances showcased at the event.

The cultural performances began with ‘The Jubilee of Pride’ where the first scene depicted a father explaining the meaning of the word ‘jubilee’ to his young daughter. The operetta featured a fantastic rendition of the poems of Emirati poet Maryam Al Naqbi by Fayez Al Saeed, Walid Al Jassem, and Faisal Al Jassem while a group of female students from Abdullah bin Al Mubarak school in Khorfakkan, performed a graceful dance in the background.

Hamid Al Thahiri wowed the audience with an amazing laser show and displayed his prowess in the artform by lighting up the venue with portraits of the rulers of the UAE. Mowafaq Al Ameri captivated the audience with his mastery of both the Al Oud and the violin.

The spirit of tolerance and cooperation that exists in the UAE was evident by the presence of several bands from different countries partaking in the jubilee celebrations. A Lebanese folk ensemble showcased their local heritage through beautiful dances and performances, which was followed by a Russian folk performance while the Iraqi ‘Al Shama’el band’ wowed the audience with amazing songs.

Fawzia Rashid Al-Qadi, Director of Khor Fakkan Municipality; and a number of officials and heads of government departments.

The UAE’s golden jubilee celebrations commenced at the Khorfakkan Amphitheatre with the national anthem, followed by an address by Khalid Jassim Al Midfa, Chairman of the Sharjah National Day Celebrations Committee. He said: “Today, we look back on the accomplishments and ambitious vision of the late Sheikh Zayed bin Sultan Al Nahyan, and his brothers, the rulers of the various emirates, that led to the formation of this country that has since founding, been at the forefront of socioeconomic prosperity in the region and beyond.”

He added that over the past 50 years, the UAE had become one of the leading countries in various economic sectors, and that he looked forward to the journey of the next 50 years as the country embarks on its next phase of growth.

He pointed out that the stunning Khorfakkan Amphitheatre was a testament of the efforts made by H.H. Sheikh Dr. Sultan bin Muhammad Al Qasimi, Supreme Council Member and Ruler of Sharjah, to craft a holistic development journey encompassing all sectors.

For his part, Rashid Khamis Al Naqbi said that the jubilee celebrations pay tribute to the men and women of the UAE who accomplished great feats. He noted that the rise in number of international events held in the country are a clear indicator of the UAE‘s global stature and prominence.

He thanked His Highness the Ruler of Sharjah for his continuous efforts to develop all cities across the emirate and transform them into regional and international tourist destinations.