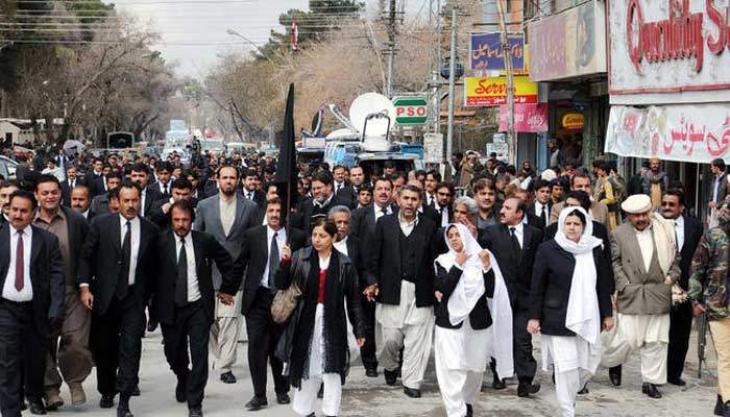 The lawyers’ top regulatory body says that alleged audio clip of former CJP Saqib Nisar has put the independence of judiciary under questions.

The PBC said that inquiry commission should comprise a retired chief justice, a senior lawyer of great repute and a senior parliamentarian of impeccable character to probe the recent allegations regarding audio and video recordings.

The demand for inquiry came after former Chief Justice of Pakistan Mian Saqib Nisar denied that the voice in the clip that went viral on social media and was telecast by the private tv channels.

The lawyers body expressed its regret that the leaked audio clip that was being attributed to former CJP Nisar regarding the conviction of Nawaz Sharif and Maryam Nawaz put the independence of the judiciary into question.

The body demanded that the commission should be constituted to formulate its recommendations for appropriate action against the responsible person by fixing responsibility for the delinquency to ensure fundamental rights of the people and to restore the confidence of the masses in the judicial system of the country.

The PBC also expressed grave concern over the price hike of daily commodities and said the same had become out of the reach of the common man.

The PBC said that increase in unemployment, worsening law and order situation and target killing of innocent people had become order of the day.

The council expressed strong reservations over the passage of 33 bills in a single day by the Federal government without consensus of the opposition, severe conditions of the IMF imposed upon the government in respect of getting loans and continuous de-valuation of the Pakistani rupee.

The council also authorised the vice chairman of the PBC to convene a convention at Islamabad immediately and invite all stakeholders, including representatives of bar bodies, civil society, media persons and leaders of political parties to discuss all thorny issues being faced by the country.

The PBC also took serious exception to visits by judicial officers to various schools on the orders of superior authorities and said it was beyond the dignity and status of a judge and the judiciary and was also violative of the fundamental rights of the citizens of Pakistan.

The PBC demanded that this exercise should be brought to an end immediately.

On Wednesday, PML-N vice-president Maryam Nawaz said that the leaked audio clip was a charge sheet against former Chief Justice Mian Saqib Nisar. On Tuesday, President and Leader of the Opposition Shehbaz Sharif had also asked the former chief justice to come clean adding that the audio clip showed how the former prime minister and his daughter had been targeted as part of the grand plot to keep them out of the political process.

Former CJP Mian Saqib Nisar, however, termed the audio clip as fabricated one and reject it, saying that he had nothing to do with it.