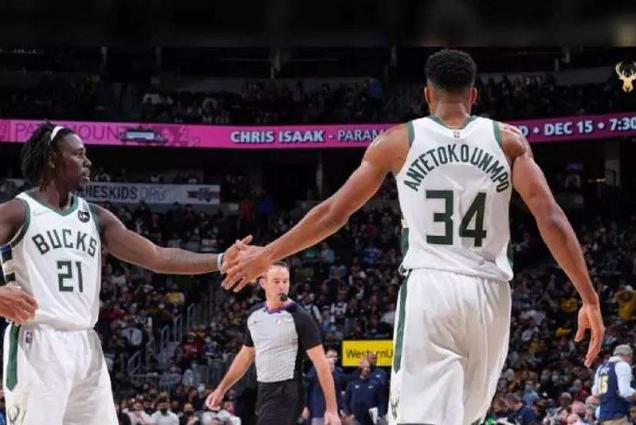 Giannis Antetokounmpo had 24 points, 13 rebounds and seven assists as the Milwaukee Bucks went wire-to-wire to capture their sixth consecutive victory with a 120-109 win over the Denver Nuggets on Friday

Pat Connaughton poured in 20 points and Khris Middleton added 17 for the Bucks, who are now four games above the .500 win mark.

Will Barton tallied 17 points and nine rebounds while Facundo Campazzo had 16 points as Denver fell behind by 20 points in the second half and shot just 17 of 47 from beyond the arc.

Jokic missed his fourth straight game for the Nuggets, who trailed by 11 at the end of the first quarter, and at the half.

Denver cut the lead to five in the third quarter before Milwaukee compiled a 20-point lead late in the fourth.

The Nuggets tried to chip away but never got closer than 12 points the rest of the way.

Eric Bledsoe busted out of a slump to score 15 points for the Clippers, who have won just three of their last seven games. Bledsoe had been averaging just 5.2 points over the previous five games.

“To have a comfortable lead was good,” coach Tyronn Lue said. “We made some shots, did a good job of getting to the paint and made the right play. We had 16 assists in the first half, so moving the basketball was good to see.” Paul George added 12 points, Ivica Zubac finished with 10 points and 13 rebounds and Isaiah Hartenstein had 10 points and five rebounds for the Clippers in front of a crowd of 18,100 at Staples Center in downtown Los Angeles.

The Clippers were missing forward Nicolas Batum, who entered the league’s health and safety protocols and is expected to miss more games.

Jerami Grant had 20 points, 10 rebounds and three assists for the Pistons, who dropped their fifth straight.

They squandered second-half double-digit leads to the Los Angeles Lakers and Miami prior to a 114-93 loss at Milwaukee on Wednesday.

The Pistons made just eight of 33 shots from the three-point line and just 36.7 of their shots overall.

Detroit welcomed back center Isaiah Stewart, who was slapped with a two-game ban by the league for an altercation with Lakers star LeBron James on Sunday.

Stewart finished with four points and 12 rebounds in 27 minutes of playing time.

The franchise record of 17 straight wins was set during the 2006-07 season.

The Suns’ next game is Saturday against the Brooklyn Nets.

“We do it one at a time. We know we have a tough opponent tomorrow that’s been waiting on us, well rested,” Booker said. “So, we just have to come in with the same mentality, play the type of basketball that we do, defend at high level, put ourselves in good shape to get it done.”Also, Atlanta Hawks rolled to a 132-100 lopsided win over the host Memphis Grizzlies, who lost Ja Morant in the first quarter with a sprained knee.