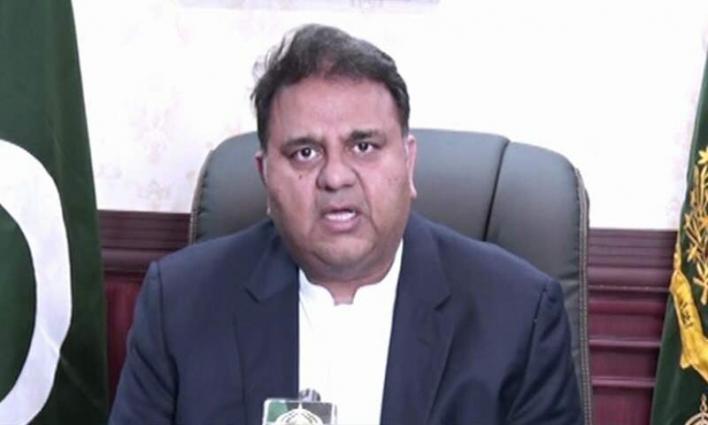 LAHORE, (UrduPoint / Pakistan Point News – 27th Nov, 2021 ) :Federal Minister for Information and Broadcasting Chaudhry Fawad Hussain on Saturday said that underlying motive of PML-N to make the institutions controversial was geared to obtain relief in cases against them.

Talking to media here, he said that PML-N generate conspiracy to hit national institutions whenever cases against them were opened.

He said that during their many years rule they (PML-N) promoted nepotism to further their vested interests. Federal Minister said that their story started from the affidavit of Rana Shamim and concluded at alleged audio recording of former Chief Justice Saqib Nisar.

The federal minister said it was very obvious that the Sharif family was resorting to such tactics as they had to present the money trail about the purchase of their properties.

However, he said that the higher judiciary should take notice and take action accordingly.

Fawad Chaudhry said PML-N won elections in 1990 against PPP though rigging and the apex court had affirmed this. However, he added that it was another matter that PPP had now joined hands secretly with PML-N.

To a question, he said that petroleum prices in the international market had come down recently and this impact would appear in few weeks time on prices in the country.

He said the government was thankful to Saudi Arabia for extending cooperation, adding the negotiations with the IMF were also being finalized.

To another query, Fawad Ch said that if Maryam Nawaz thought the audio recording of Saqib Nisar could benefit her case, then she should take it to the court.

Later, speaking at a programme in connection with the death anniversary of Maulana Zafar Ali Khan, Information Minister said that Maulana Zafar is remembered as ‘Baba-e-Sahafat’ for his great contribution towards journalism during the Pakistan movement.

He said that during the Pakistan movement first ever newspaper was launched from the Lahore city which later became centre of journalism in the “North India” of that time.

Zamindar newspaper was launched in 1903 as a weekly paper in Lahore by Maulana Zafar’s father Maulana Sirajuddin Ahmed. Later, Maulana Zafar Ali Khan took over as editor of the newspaper.

The minister spoke about the Nazria-e-Pakistan trust and said it had been an active forum for raising awareness especially among youth about the Pakistan movement and its objectives. He suggested that their building should have a museum based on records and history of newspapers’ progress in the region.

He added that urdu Bazar was a historical market of the Lahore city and there was a need to take forward the legacy of Urdu literature and journalism linked with this decades old market.

Fawad Ch said that Pakistan carried huge potential for progress in all fields and it could be made a fully developed country under a sincere leadership.

He said in older days there was ‘information” but sources to disseminate information were quite limited.However, in present times fast tools and modes are available to spread the information. He said that unfortunately spreading ‘fake news’ has now become easier too and there was a need to stop this trend as authenticity of news is a basic merit of journalism.

The minister referred to the recent audio recording episode where he said that fake audios were spread to influence cases by a political party.

He said that PPP and PML-N governments left huge debts which have burdened the economy to date.

However, he added that the present government led by Prime Minister Imran Khan has provided a strong base for development as the country was progressing in all fields.