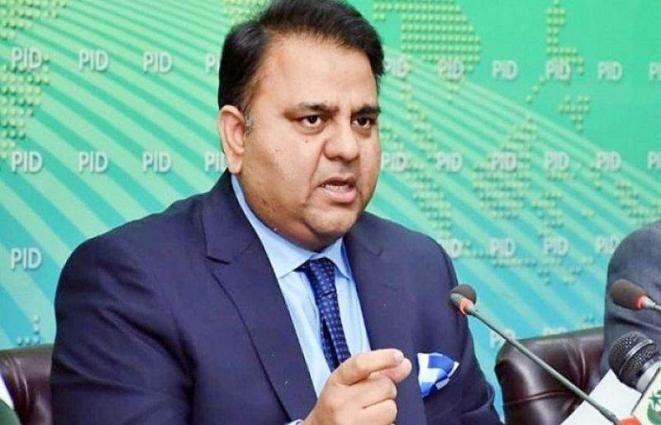 Federal Minister for Information and Broadcasting Chaudhry Fawad Hussain Friday said that Pakistan Muslim League-Nawaz (PML-N) President Shehbaz Sharif was left with only two options: either to go to London or jail

Talking to the media here, he said that Lahore‘s media should analyse the witnesses and evidence by covering the court‘s proceedings and evaluate whether Shehbaz Sharif was involved in money laundering or not, instead of giving coverage to Shehbaz Sharif‘s claims or remarks.

The minister said that Shehbaz Sharif should not worry as the country was moving in the right direction and people of country fully supported Prime Minister Imran Khan-led government. He said the opposition was in a state of confusion, as first it claimed that Nawaz Sharif was returning to the country on his own; however when the government offered them that it would bring him (Nawaz) back, then they backed off.

To a question, he said that previous regimes of Nawaz Sharif and Asif Ali Zardari damaged the national economy by getting huge loans, due to which now the government had to pay off these loans of $55 billion in the next two years. It has to take loans to return the previous loans, he added. Today, even after paying off huge amounts in loans, Pakistan‘s economic situation was still stable and growing, he asserted.

To another query, Chaudhry Fawad Hussain said that the opposition central leadership had been absconding; so how the government could hold talks with them, adding that Pakistan People’s Party and Pakistan Muslim League-Nawaz should engage in national politics but they did not want to do so.

The PPP had always played the Sindh card instead of strengthening the federation. Now the Sindh government had deprived the people of Sindh from the Sehat card, he said and added that PPP‘s leadership was afraid of its own workers and was unable to face them. He said the PPP had become unpopular due to its leadership’s negative policies. That was why it could organise a public gathering even at a 10-marla space, he added.

He said that victory or defeat were part of electoral process as the political leaders were answerable to people about their political efforts and commitments, adding that the PTI won elections in Sialkot and Federally Administered Tribal Areas.

Earlier, the minister said that Prime Minister Imran Khan had once again expressed his commitment to the people of the country and pledged to make Pakistan a welfare state based on the principles of Riyasat-e-Medina. He said that the corrupt era of previous governments had ended in Pakistan as now a people-centric government was working to put the country on the way to progress and prosperity.

He said the opposition‘s central leadership did not attend the National Assembly‘s proceedings while they claimed that 29 members of Pakistan Tehreek-e-Insaf had contacted the PML-N. But, in fact, the whole opposition members were in contact with the PTI and even the PML-N members did not oppose the Supplementary Finance Bill, he added.

Fawad said it was an irony that PML-N‘s leader and former defence minister Khwaja Asif, who was employed in an organisation in Saudi Arabia and getting salary, was telling the PTI government about the threats and challenges to national security and integrity. People have been aware about the real faces of them, he asserted.

The minister said that the value of rupee against US Dollar strengthened after presentation of finance bill, which would further help in reducing the inflation during the next three to four months, as the international factors causing inflation including commodities and energy products had shown a downward trend.

The PTI government introduced a largest social protection programme to bring improvement in people’s living standards besides strengthening the economy, he said and added that owing to the solid policies of the government, a significant improvement in Pakistan‘s economic situation would be observed till August or September. Pakistan‘s economy and defence as well as political situation were stable, he added.

Fawad Hussain said that Federal Minister for Planning & Development and Special Initiative Asad Umar and National Command and Operation Centre (NCOC) deserved appreciation over achieving the Covid-19 vaccination set targets, adding that the PTI government had successfully handled the Covid-19 pandemic through its effective strategies and timely measures. An international publication ‘Economist’ also appreciated Pakistan‘s efforts against Covid-19 and its conversion rate to normalcy after the pandemic.

These days, on one side the foreign countries including United Kingdom, United States, Saudi Arabia and European countries were imposing travel restrictions but on the other side, Pakistan was the only country which effectively overcame the pandemic by consistent policies, he added.

He also paid tribute to soldiers of the Pakistan Army who embraced martyrdom in an operation in the Mir Ali area of North Waziristan and said that the soldiers of Pakistan Rangers, Police, Frontier Corps (FC) and other law-enforcement agencies, who sacrificed their lives to protect the motherland, deserved salute.

He also stressed the need to revive the film and drama industry for effectively projecting Pakistan‘s positive image and narrative across world through quality content.