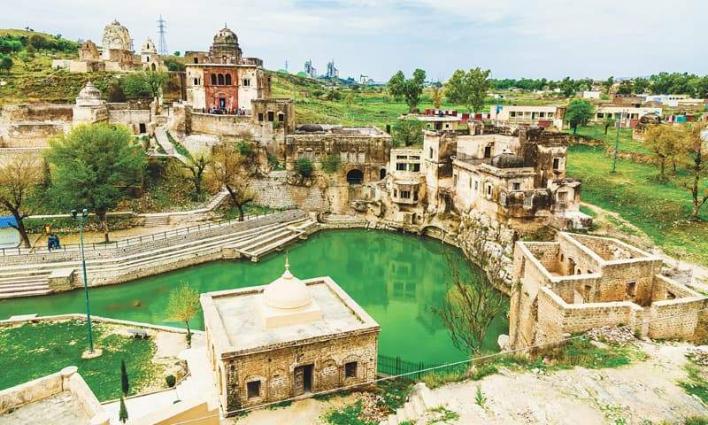 In addition to 87 Hindu pilgrims from India who arrived in Pakistan on December 18 to perform religious rites at Katas Raj Temple, another 200-member worldwide Hindu delegation would be arriving in Pakistan on January 1,2022 through Dubai and Wagah border, to go to their sacred locations and historic sites together with Samadhi of Shri Param Hans Ji Maharaj/Teri Temple in Karak, Khyber Pakhtunkhwa.

After opening of Kartarpur Gurdwara, the facilitations extended for Hindu pilgrims showed that Pakistan was a minority friendly country and believed in promoting a culture of peace, tolerance and harmony.

Pakistan had already opened a 1,000-year-old Hindu temple in eastern city Sialkot for “worship” for the first time since partition.

Meanwhile, Hindu yatrees who visited the Krishna Mandir in Lahore appreciated the steps taken by Pakistan‘s Evacuee board for the care and renovation of their Gurdwaras.

In January 2021, a 126-year-old Shiv temple in Pakistan‘s Sindh province opened for worshippers after renovation and its administrative control were handed over to local Hindu organization.

Pakistan issued visas to more than 90 Indians to visit two prominent Hindu temples in December against the backdrop of ties between the two countries being at an all-time low.

A group of 44 Indian yatrees visited Shadani Darbar in Sukkur, a temple that was more than three centuries old, to mark the 312th birth anniversary of Shiv Avtari Satguru Sant Shadaram Sahib.

Pakistan remained committed to preserving sacred religious places and extending all possible facilitation for the visiting pilgrims of all faiths.

Pakistan had decided to relax its mutually laid limit with India of 10 days advance intimation before the arrival of Sikh pilgrims to visit Kartarpur in November 2021 as a sign of respect for the religious sentiments of the Sikh Yatrees given India‘s last-minute decision to open the Kartarpur Corridor.

Minority Rights Group International (MRG) noted that opening the Kartarpur Corridor was a symbol of peace and respect between religions and deserved applause.

UN chief Antonio Guterres said the opening of the Kartarpur Sahib Corridor was a practical example of Pakistan‘s desire for peace.

Pakistan was a moderate and tolerant society and warmly welcomed tourists of other faiths.

Pakistan was a safe country for tourists especially for spiritual and religious tourism.

There were ancient and historical religious sites of other faiths for tourists and government of Pakistan was fully committed to protect and preserve them.

Pakistani people were friendly to tourists and government fully support besides facilitating the foreign visitors.

Pakistan was promoting religious vibes in the region by facilitating various ethnic communities. Pakistan had opened different religious sites in the country to allow minorities to perform their religious obligations.

Pakistan was the only country in South Asia where minorities were living in a peaceful way protected by the government.

There were certain quarters in the region that deliberately and continuously tried to malign Pakistan over flimsy grounds vis-�-vis minorities issue.

Pakistan was becoming religious and interfaith harmony hub for minorities. Even, international community and organizations were acknowledging Pakistan‘s efforts to promote religious harmony.

Pakistan’s efforts to respect its diplomatic commitment to promote religious tourism and interfaith harmony had set in motion discussions in India regarding how to build on this positive sentiment and respond with a similar peacemaking gesture.