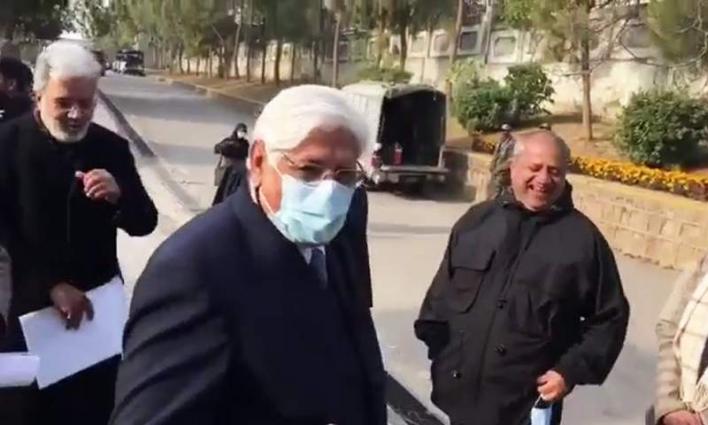 Ansar Abbasi says that the court should not frame the charges against  the journalists, AGP also asks the court to defer the indictment.

IHC Chief Justice Athar Minallah was hearing the matter related to affidavit of former chief justice of Gilgit-Baltistan (GB) Rana Shamim that was published by a local English newspaper.

On it, the journalist told the court that it was mentioned in the court order while quoting him that even if a claim was wrong he would publish it in the interest of the public.

At this, IHC CJ observed, “In your application, you yourself had written that you were not aware whether his claim against Nisar was true or not,”. CJ Minallah also asked Abbasi whether he would publish an affidavit solely on the basis of a prominent personality handing it to him.

The CJ observed that there was a narrative that former CJP Saiqb Nisar had influenced a judge in a case but the said judge was not even the part of that bench that tried Nawaz and Maryam.

He observed, “Justice Mohsin Akhtar Kiyani, Justice Miangul Hassan Aurangzeb and I were part of that bench and the story casts an impression that we had been influenced,”.

He also observed it would take place against the judges who were part of the bench if an inquiry is held.

The CJ also remarked that he had tried to make it clear to the journalist during hearing of the case that what damage he had done.

Addressing Abbasi, the CJ asked him to have a look at the past papers and he would know what he had published.

The story, he remarked, was published just two days before the hearing of the appeals. On it, the journalist said that Shamim will have to answer to the court regarding his affidavit.

The journalist said that he followed the journalistic principle while reporting this issue and published both sides. He said that he published the claim of former GB judge and also the stance of the former CJP Nisar who denied it

At this, the IHC CJ remarked that he respected the right to freedom of expression and that he did not care about the criticism towards himself.

He observed that he was hearing second contempt of court case in his judicial career.

He remarked, “sometimes the things are done unintendedly.No one knows about the importanace of the ongoing case in the court, “.

Pointing out to Abbasi, the CJ remarked that the matter was sub judice and still the statements from international institutions were being published. On it, Ansari said that in his view, the court should not go to indictment.

At this, CJ Minallah observed, “You will not decide this, the court will; you cannot dictate the court,”.

In the last hearing, the IHC decided to indict the former GB chief judge and others in a contempt of court case pertaining to the publication of an affidavit containing serious allegations that ex-chief justice of Pakistan Saqib Nisar attempted to influence a case.

It may be mentioned here that Reporters Without Borders (RSF) and other journalist organisations had urged the IHC to halt contempt proceedings against the journalists.

Pakistan Federal Union of Journalists (PFUJ) Secretary-General Nasir Zaidi, who was present during the hearing, said the court was a light in the darkness, as this court had given journalists justice.

“It is my appeal that you refrain from framing charges,” he pleaded.

The court asked PFUJ’s secretary-general whether the court‘s last order was sent to international organisations. At this, Zaidi said the “court’s decision was printed out and the text was circulated across the world“. The IHC CJ then asked whether he should also appoint a foreign specialist to assist in the case given the circumstances.

At this point, Abbasi said: “We publish several statements, but we don’t mention whether they are true or not”.

The IHC CJ repeated his question that if the journalist was not aware of the authenticity of Shamim’s affidavit, then why did he publish it.

After the conversation between the journalist and Justice Minallah ended, ex-CJ GB Rana Shamim’s counsel Abdul Latif Afridi started his arguments and stated that it was not possible to stop an international organisation from commenting on anything.

Afridi, noting that every day some minister or adviser gives a statement which also gets published, also argued that since one of the suspects was not present in court today, charges should not be framed.

As the lawyer was speaking, Abbasi told the IHC CJ that he took care while publishing the affidavit and did not name the judge in the story. “I thought that this matter was no longer moot.”

During the proceedings, the court‘s amicus curiae, Faisal Siddiqui, apprised the judge that “irresponsibly” publishing a news story did not warrant criminal contempt proceedings against a person.

“I am just against indicting journalists […] take a look at Firdous Ashiq Awan‘s contempt case; Awan was involved in contempt of court and every media channel aired [her press conference].”

“Even in that case, no proceeding was carried out against the media.”

At this, the IHC CJ said the issue is with Abbasi’s stance, as he asked the journalist to show him any judgment which might suggest that the court issued orders under influence.

Attorney General for Pakistan (AGP) Khalid Jawed Khan pleaded with the court that in case journalist Abbasi receives an affidavit from now on, he would make sure to investigate it further.

The AGP said the court should indict Rana Shamim and that he would be given a fair trial. However, he asked the court to delay the indictment of the journalists. “But they should remain present during court proceedings”.

After hearing the arguments, the IHC CJ told the journalist that he was not questioning his credibility, but also mentioned that “Abbasi sahab, I do not doubt your credibility, but you do not realise that you are at fault here”.

The court then adjourned the hearing of the case till January 20.