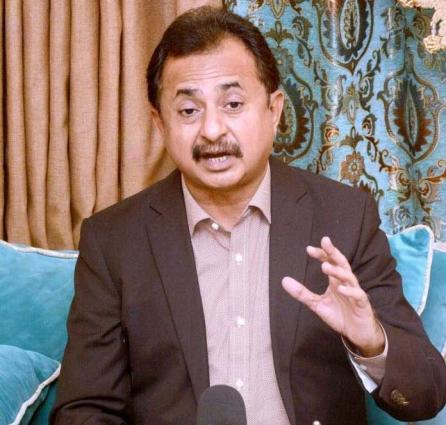 Leader of the Opposition in Sindh Assembly, Haleem Adil Sheikh, on Monday demanded of Sindh government to pay health risk and other allowances as well as well arrears to employees of National Institute of Cardio Vascular Disease (NICVD) Karachi who were protesting for their rights

KARACHI, (UrduPoint / Pakistan Point News – 10th Jan, 2022 ) :Leader of the Opposition in Sindh Assembly, Haleem Adil Sheikh, on Monday demanded of Sindh government to pay health risk and other allowances as well as well arrears to employees of National Institute of Cardio Vascular Disease (NICVD) Karachi who were protesting for their rights.

The opposition leader accompanied by MPA Saeed Afridi and PTI leader Gohar Khattak and others paid a visit to NICVD to express solidarity with protesting employees of the institute.

They assured the protesting employees that the Pakistan Tehreek-e-Insaf will join their protest if their genuine demands would not be met.

Haleem Adil Sheikh, while talking to journalists, said that patients were already not getting adequate healthcare facilities at NICVD.

He said that now nurses, paramedical staff and other employees of the institute were compelled to stage a protest for their demands.

He said that Sindh government claimed that people from abroad come to NICVD for treatment but state of the affairs was extremely distressing. “NICVD is no more a center for curing hearts but become a heartbreaking hospital,” he commented.

He said that due to non availability of stunts in the institute a number of patients were treated with balloon angioplasty from 17 to 25 September that tantamount to deceiving the patients and a clear violation of medical ethics.

The annual budget of NICVD was Rs. 12 billion while in the last few years they have also received additional funds amounting to Rs. 41 billion but the institute was being run on Zakat from previous six months, Haleem Adil Sheikh observed.

He alleged that Rs. 7 billion out of annual budget of Rs. 12 billion were being embezzled as PPP Sindh government had turned NICVD into a hotbed of corruption and its executive director Dr. Nadeem Qamar was patron of all the thieves.

Haleem said that Naveed Qamar’s monthly salary was over Rs. 6 million and he had received Rs. 256 million in last three years while other directors of NICVD were getting lucrative monthly allowance but the workers were being denied health risk, utility and other allowances as well as arrears.

Around 7 thousand employees of NICVD were entitled to get monthly allowance of Rs. 17,000 each while there were arrears of over Rs. 100 million as their due amount was not being paid to the employees who served as front line workers, he added.

Leader of the opposition said that there were a number of corruption cases against NICVD under proceeding in courts and NAB and a legal firm of a PPP stalwart was paid Rs.16 million for defending their corruption but employees were deprived of their rightful outstanding amount on pretext of scarcity of funds.

Meanwhile millions of rupees were spent on unnecessary air travel and several favored people were inducted on exorbitant salaries but NICVD employees who raised voice for their legitimate rights were coerced by the administration, he said and termed it as a sheer injustice to the employees who put their lives and well being on risk for service to humanity.

Haleem Adil Sheikh said that Omicron variant of Covid-19 was spreading at an alarming rate in Sindh and positivity ratio has touched 15 percent while vaccination ratio in Sindh was the lowest across Pakistan.

Though health is a provincial subject, Federal government provided millions of doses of vaccines to Sindh that spent not a single rupee on procurement of vaccine, he noted adding that but here in Sindh even the vital vaccine was stolen.

PTI MPA Saeed Afridi speaking at the occasion said that health sector employees were front line workers who risk their lives to save ailing humanity and depriving them of their right was a matter of grave concern and injustice.

He said that employees who were exposed to communicable disease due to their proximity to patients were declined health risk allowance while directors sitting in air conditioned secure offices were claiming the allowance.

He said that PTI would raise voice for rights of the employees at every forum and would not leave them alone.