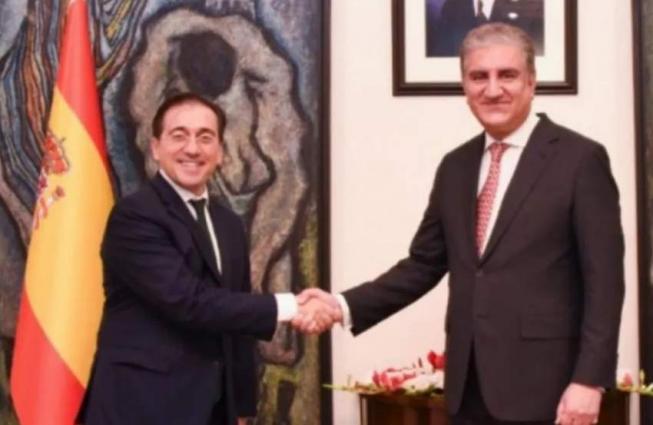 During the meeting, the foreign minister, who arrived here Monday, discussed the bilateral relations, trade and economic relations, besides regional and global situation.

The foreign minister told his counterpart that over 125,000 Pakistani expatriates in Spain contributed to strengthening the bilateral relations.

He hoped that the Spanish government would seriously consider the resolution of the issue confronting the Pakistani citizens.

Expressing satisfaction over the existing bilateral relations, both the foreign ministers agreed to further strengthen the ties.

He said the unanimity of views on terrorism and regional and international affairs including the UN reforms was welcoming.

Both sides stressed the need to further activate the mechanism of Annual Bilateral Consultation and agreed to hold the fifth round of ABC soon during the current year.

Foreign Minister Qureshi said with a trade volume of $1.3 billion, Spain was among the biggest trade partners.

Discussing the Afghanistan situation, the foreign minister asked the EU to play an effective role to avert a humanitarian crisis in the war-torn country.

Regarding the situation in India Illegally Occupied Jammu and Kashmir, the foreign minister apprised his counterpart of the threats posed by the Indian policies to the regional peace.

He said Kashmir was a core dispute between Pakistan and India and a just resolution of the issue was inevitable for regional peace and stability.

He said owing to its pro-business policies, Pakistan‘s ranking in the ease of doing business had improved.

The foreign minister told the trade minister that the Spanish companies could take advantage of opportunities in Pakistan by investing in housing, pharmaceutical, renewable energy, agriculture, and sports industries.

He also welcomed the entry of Spanish business giants in Pakistani market and hoped that more companied would follow the suit. Highlighting Pakistan‘s tourism potential, Qureshi said Pakistan desired to benefit from Spain‘s expertise in the sector.