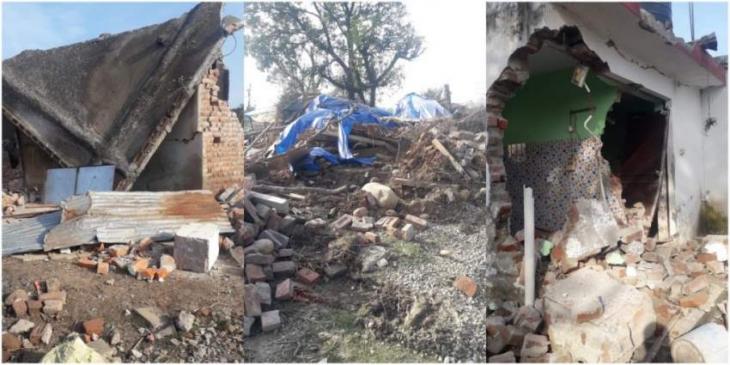 In Indian Illegally Occupied Jammu and Kashmir, the people staged forceful demonstrations in various districts of the Jammu region against the demolition of the houses of members of Muslim Gujjar and Bakerwal community by the authorities

ISLAMABAD, (UrduPoint / Pakistan Point News – 15th Jan, 2022 ) :In Indian Illegally Occupied Jammu and Kashmir, the people staged forceful demonstrations in various districts of the Jammu region against the demolition of the houses of members of Muslim Gujjar and Bakerwal community by the authorities.

The authorities have demolished structures of several families belonging to Gujjar and Bakkarwal Muslim community during the so-called anti-encroachment drive in Roop Nagar area of Jammu, Kashmir Media Service reported.

Scores of people assembled in front of Markazi Jamia Masjid in Rajouri and took out a protest rally that concluded at Gujjar Mandi. Raising slogans against the authorities, the protestors said that the recent demolition drive by the department was purely selective and aimed to target the Muslims.

They said that the drive by the Jammu District Administration (JDA) and assisted by other departments has left dozens of families homeless in these tough winter days which clearly shows that policies of these departments are anti-people.

The protestors while warning of more such protests in days to come demanded that all the homeless families should be given proper shelters and be rehabilitated at the earliest.

In Kalakote area of Rajouri, people also staged a protest and raised slogans against the authorities.

Meanwhile, people from all the families whose structures were damaged during the stimulation drive continue their sit-in protest at Roop Nagar.

NC’s Member of Indian Parliament from IIOJK, Hasnain Masoodi, also denounced the selective demolition by the JDA and administration of houses of members of Muslim community.