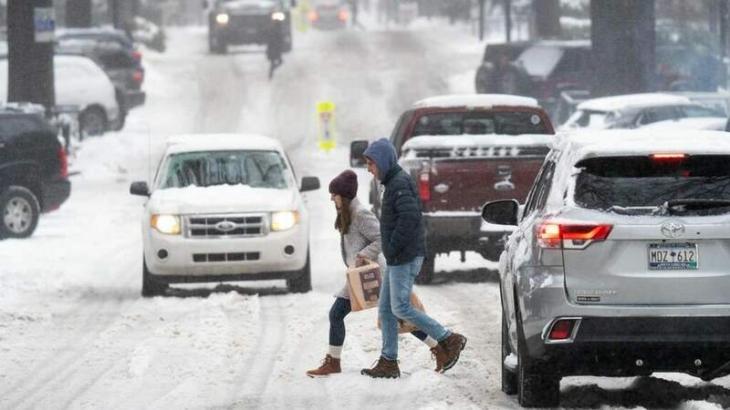 About 215,000 American customers were without power at 1:00 pm EST (1700 GMT), according to the website PowerOutage.us, with the largest concentration in the southeastern states of North and South Carolina and Georgia.

Nearly 1,600 flights within, into or out of the United States were canceled by lunchtime Monday, in addition to the 3,000 the day before, according to flight tracking website FlightAware.

Large swaths of the Canadian provinces of Quebec and Ontario remained under winter storm or blizzard warnings, according to a Canadian government website.

In Toronto, up to two feet (60 cm) of snow were expected — “a historic storm for the city,” tweeted Anthony Farnell, chief meteorologist of Canadian tv channel Global news.

Many schools were closed and school buses were not operating in Quebec and in the south of Ontario, including the Toronto area.

Students had been due to return to class-rooms on Monday in both provinces after the holiday break.

The US National Weather Service (NWS) said earlier it expects the storm to “slowly wind down today,” but that snow will continue to fall through the evening in upper New York and New England.

“Significant impacts due to snow, ice, wind, and coastal flooding will persist across a large area,” NWS said in a tweet.

The storm spawned damaging tornadoes in Florida, while in the Carolinas and up through the Appalachian mountain region icy conditions and blustery winds raised concerns.

Transport was seriously disrupted, with thousands of flights canceled, and a portion of busy interstate highway I-95 closed in North Carolina.

In Toronto, where snowfall is more common, police tweeted that they had closed two sections of highway due to extreme weather, and asked drivers to stay home, “unless it’s absolutely necessary.”Behind the storm, powerful winds downed trees and caused coastal flooding, with a 12-foot storm surge reported in Boston.